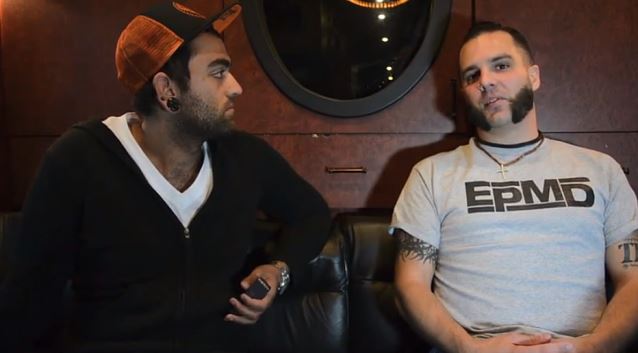 Aaron Tamachi of Lithium Magazine conducted an interview with singer Jesse Leach of Massachusetts metallers KILLSWITCH ENGAGE on October 23 in Toronto, Ontario, Canada. You can now watch the chat below.

KILLSWITCH ENGAGE's fifth studio album, "Disarm The Descent", sold around 48,000 copies in the United States in its first week of release to land at position No. 7 on The Billboard 200 chart. The CD arrived in stores on April 2 via Roadrunner Records.

"Disarm The Descent" is KILLSWITCH ENGAGE's first album with original singer Jesse Leach at the vocal helm since 2002's now-classic, genre-defining "Alive or Just Breathing". Leach returned to the band in January 2012 after a decade-long absence. The artwork for the new CD was created by bassist Mike D'Antonio.

In a recent interview with ARTISTdirect, Leach stated about "Disarm The Descent": "Mike D'Antonio thought up the title 'Disarm The Descent' even before I started writing. He approached me with a concept. Initially, it was 'Disarming The Descent'. After some discussion with him, I said, 'Let's just shorten it up.' I thought it was a great title. We talked about it a bit, and I wrote that at the top of the page and began writing notes from there. It's kind of a concept record."

KILLSWITCH ENGAGE's "Always" video can be seen below. The clip was helmed by McFarland & Pecci, the company co-owned by award-winning directors Ian McFarland and Mike Pecci.

McFarland & Pecci previously worked with KILLSWITCH ENGAGE on the 30-minute documentary "New Awakening", about the recording process for "Disarm The Descent" and the video for the CD's lead single, "In Due Time".