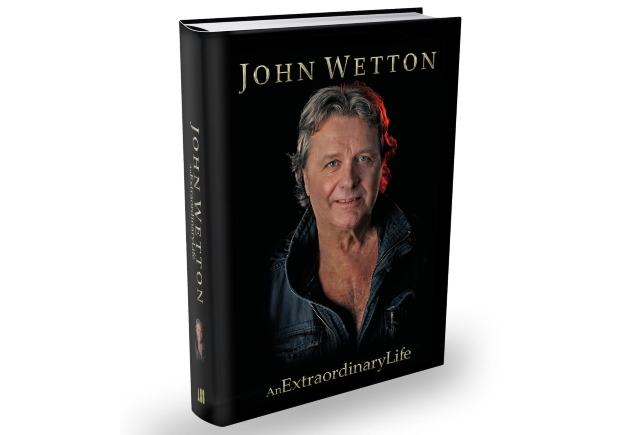 An official book about legendary singer and bassist John Wetton is available for pre-order at www.johnwettonbook.com.

The sign-up is now open for people to be a part of this much-anticipated book created with John's family and management. Some seventy-plus people who knew and worked with John, from his school days through FAMILY, KING CRIMSON, URIAH HEEP, WISHBONE ASH, ROXY MUSIC, UK, ASIA, the John Wetton solo band and beyond, pay witness and tribute to his life and work. Among those quoted along with his family are Steve Howe, Phil Manzanera, Bill Bruford, Robert Fripp, Carl Palmer, Rick Wakeman, Dave Kilminster, Geoff Downes (who also wrote the preface) and many, many more.

Among the stories of friendship, music and sometimes craziness are reflections on what made John Wetton such an unforgettable musician and prog rock legend.

Along with stories of John's musical success are those from friends and family who do not steer clear of his problems, but rather explain the why, the how, and eventual triumph over them in honest and touching recollections. Along with the stories are personal and classic photos of John at work and play in two extensive photo sections of "An Extraordinary Life".

Downes said: "He had a love for fast cars, fine food, coffee, the Rams (that's Derby County for non-football followers),films, books, crosswords, current affairs, sport, languages, classical music — anything that would stimulate his mind that he could use to great effect in his music and lyrics."

Wetton died in January 2017 after a long and courageous battle against colon cancer.

John rose to fame with KING CRIMSON in the early 1970s during the iconic "Red" era and later formed the band UK. In the early 1980s, he was a founder member of supergroup ASIA which was his biggest commercial success. The band's 1982 self-titled debut album was the biggest-selling album in the world that year and gave fans and mainstream radio the mega-hit "Heat Of The Moment".

John had been planning to tour with ASIA for the band's U.S. arena tour with JOURNEY and, following the success of his solo "Studio Recordings Anthology", to continue working on the ongoing re-issue program of his solo albums, via his own Primary Purpose label.

John valued his over 11 years of sobriety and volunteered time in fellowship with other alcoholics to share his experience, strength and hope with them.

The very last studio song of Wetton's career was the closing track on the ASIA album "Gravitas" and included the profound lyrics "Think the best of me, 'till we meet again."