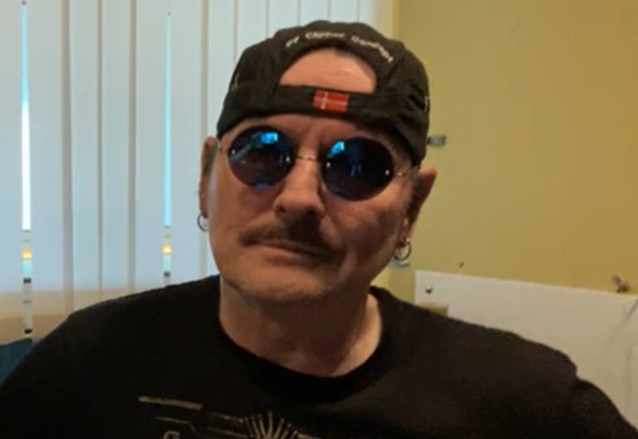 During a recent appearance on Full Metal Jackie's nationally syndicated radio show, legendary Danish heavy metal singer King Diamond spoke about the differences in the songwriting styles between MERCYFUL FATE and his namesake band. He said: "Well, Hank [Shermann, MERCYFUL FATE guitarist] is a different type of songwriter than Andy [La Rocque, KING DIAMOND guitarist] is. And, of course, I write a lot myself, especially for KING DIAMOND I do about two-thirds of the music and all the lyrics. And then MERCYFUL FATE is — we're doing it a little bit more like the old days, like 'Don't Break The Oath' maybe, where I will probably write three or four songs, and Hank will be doing the rest, whether it's five or six or whatever. So, he will do a little bit more music than I will do, and I do still all the lyrics.

"I was always the one that was swinging this big scalpel around, kind of," King continued. "Whenever Hank came with some riffs and ideas for putting a song together, I would often sit there and — I wouldn't say I would 'steal' some of his solo riffs, some of the riffs that he was gonna play solo [over], but it often happened that they were better to sing to than the ones I was given for vocals, you know? So we would do these exchanges and kind of, 'Hey, can I sing over this instead 'cause it's much better to sing over?' 'Oh, sure. I'll fix another piece up for me to play a solo over.'

"So it's still the same right now, I would say. It's very much the old-fashioned way we're doing it now. 'The Jackal Of Salzburg', the new [MERCYFUL FATE] song [that we have been playing at recent shows], when I first heard it, I think it was seven minutes and 24 seconds, and now that it's finished, it's about eight minutes and 54 seconds. So it's almost nine minutes. So, from me listening to it, and then Hank had a very nice response to it when finally I said, 'Try these and these and these things. He said, 'Okay.' And then he went back to the studio and started working on all this stuff and then he came back and said, 'Man, it sounds so MERCYFUL FATE right now.' … Suddenly it just was right.

"So it's both of us that have these things that they work very well together, these ideas," King added. "And we understand each other. It's the same with Andy; it's just a slightly different style that Andy has. And that's good, because that gives, of course, a purpose to be with KING DIAMOND also, for being able to write songs and stuff like that. We have this very special songwriting relationship with me and Hank, and also me and Andy. And now we have definitely been re-experiencing the way we used to do it in the old days, 'cause that's exactly how we've done this new stuff."

MERCYFUL FATE kicked off its first North American headlining tour in over two decades last month. Stepping in on bass for MERCYFUL FATE at these shows was Becky Baldwin, a British musician who has previously played with FURY, TRIAXIS and CONTROL THE STORM. She filled in for MERCYFUL FATE's regular bassist Joey Vera, who was unable to make the trek due to a scheduling conflict with his longtime band ARMORED SAINT.

MERCYFUL FATE's North American tour, which featured support from by KREATOR and MIDNIGHT, wrapped up on November 16 in Atlanta, Georgia. The tour followed MERCYFUL FATE's stunning headlining performance at this year's edition of Psycho Las Vegas.

MERCYFUL FATE debuted "The Jackal Of Salzburg" in Germany this past June.

The band's current lineup is King on vocals, Hank and Mike Wead on guitars, Bjarne T. Holm on drums and Vera on bass.

KING DIAMOND is continuing to write material for its long-awaited new album. Titled "The Institute", KING DIAMOND's first studio LP in 16 years is tentatively due in 2023 via Metal Blade. It will be made available as a two-LP horror concept story, with the second part arriving at a later date.

Back in November 2019, KING DIAMOND released its first new song in 12 years, "Masquerade Of Madness".