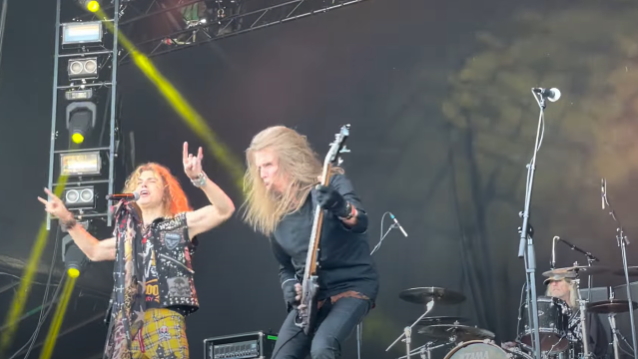 KINGDOM COME has been blasted for its disastrous performance at the Sweden Rock Festival in Sölvesborg, Sweden, with one reviewer calling it the event's "biggest fuckup."

Original KINGDOM COME singer Lenny Wolf is not involved with KINGDOM COME's reunion tour, which initially came together to celebrate the 30th anniversary of the release of the band's self-titled debut album.

In his review of KINGDOM COME's June 10 appearance at Sweden Rock, Peter Johansson of the popular Swedish site Rocknytt criticized the band for the inclusion of "several lengthy, uninspired, uninteresting and completely meaningless solos on both guitar and bass", saying that the musicians "completely massacred" one of their most popular songs, "Do You Like It". He also singled out Kottak, writing that the drummer played "really badly, sluggishly" and at times failed to keep the tempo "worryingly throughout the concert". At the end of the show, Kottak "stumbled to the edge of the stage to bow with his bandmates," according to Rocknytt.

Also critical of KINGDOM COME's performance was renowned Swedish music journalist and guitar player Janne Stark, who took to his Facebook page to share a photo of the gig and he wrote in an accompanying caption: "I've never seen a drummer fall asleep on stage before but James Kottak is pretty damn close. Drunk? He slows down every song to half tempo. KINGDOM COME, sorry guys but this is SHIT! Edit: they actually managed to make it worse…. Bass solo".

A few fan-filmed videos of KINGDOM COME's appearance at Sweden Rock have emerged online, with one YouTube commenter, Richard Tedeschi, writing below the "Shout It Out" video: "Does anyone know what was going on with the drummer slowing down and not keeping time?"

In September 2016, Kottak was dismissed from SCORPIONS during his well-publicized battle with alcoholism and was replaced by former MOTÖRHEAD member Mikkey Dee.

After its early run of success in the '80s, KINGDOM COME released several albums, with Wolf remaining the only constant member of the band prior to the band's reformation. The group's most recent effort was 2013's "Outlier".

I’ve never seen a drummer fall asleep on stage before but James Kottak is pretty damn close. Drunk? He slows down every…