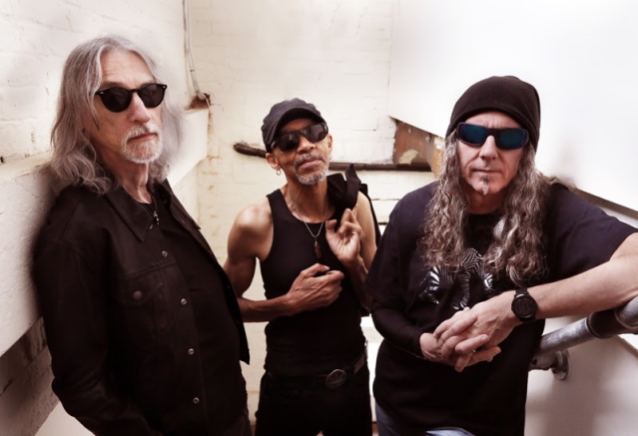 KING'S X was forced to cancel its concert tonight (Saturday, November 26) at the Warehouse Live in Houston, Texas.

Earlier today, the band released the following statement via social media: "It is with our deepest apologies that we have to cancel tonight's show, in Houston, TX! Our guitarist [Ty Tabor] started to exhibit symptoms, and we immediately tested him and found that he was positive for Covid.

"We will do everything we can to reschedule this show, and come back and play for you all! We are truly truly sorry for this, Faith, Hope Love."

In a separate video message, KING'S X drummer Jerry Gaskill said: "Hey Houston. We just found out that Ty contracted Covid. We came to do a soundcheck, and he just can't do it." Added KING'S X frontman Doug Pinnick: "He can't even stand up." Continued Jerry: "I had Covid a month ago, and if he feels any way the way I felt, I couldn't do the show." Pinnick said: "I got it too, and I know what it's like." Gaskill added: "There's no way we can do a show. We don't know what else to do." Pinnick chimed in: "There's nothing we can do but cancel. Sorry. We really wanted to play." Jerry concurred: "We really, really wanted to play."

KING'S X released its 13th studio album, "Three Sides Of One", on September 2. The follow-up to 2008's "XV" was recorded in 2019 at Black Sound Studio in Pasadena, California with Emmy Award-winning producer Michael Parnin.

It is with our deepest apologies that we have to cancel tonight's show, in Houston, TX!

Our guitarist started to...