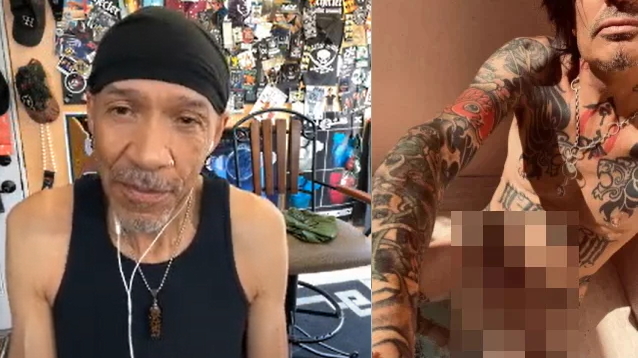 In a new interview with "The Chuck Shute Podcast", KING'S X frontman Doug "Dug" Pinnick was asked what he thought about MÖTLEY CRÜE drummer Tommy Lee posting a nude photo on social media last week. Doug responded (as transcribed by BLABBERMOUTH.NET): "Well, you know, I wish I had the balls of Tommy Lee. He just did it. I mean, come on. He puts it out there and says 'oops' on the top of it. It's obvious he did it on purpose, just to see what would happen. And he got what he wanted — he got everybody talking. Purpose. That's important. People, don't you get it? Publicity stunt. You're talking."

The 71-year-old Pinnick, who came out as gay 1998 during an interview for a Christian magazine, continued: "Whatever it is, he got the attention that he needed, and I'm jealous because I wish I had balls to do that. And you would too, if you looked at the world like he did. And at the end of the day, they're gonna take it down anyway. So what's he gonna do? And even if he goes to jail for it, he'll get out the same day. He's got lawyers that'll beat this — no problem. Tommy does what he wants to — as long as I've known Tommy, Tommy does what he wants to.

"A friend of mine texted me, 'I can't believe Tommy did that.' And I go, 'What do you mean 'he did that'? We all saw him fuck Pamela — all of us did,'" Pinnick added, referring to the private sex tape of Lee and his former wife, "Baywatch" star Pamela Anderson, which was stolen and sold to the public in 1996. "And he looked up and said, 'Yeah. We did.' I'm going, 'And that was a hundred years ago.' I said, 'So why is everybody going, 'Oh my God'?' Get out of here. But, hey, everybody's talking. I thought it was cute."

After Lee shared the full-frontal selfie on July 11, with the caption "Ooooopppsss", Instagram and Facebook took it down within hours for violating nudity rules.