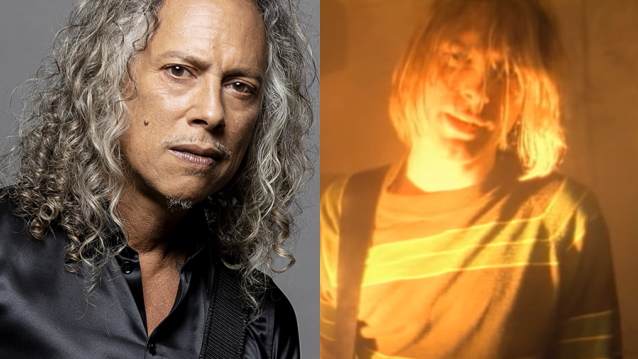 In a brand new interview with NME, Kirk Hammett reflected on the fact that NIRVANA turned down the opening-act slot on a 1992 stadium tour featuring METALLICA and GUNS N' ROSES.

"I had to make the phone call to Kurt [Cobain, NIRVANA frontman] to talk to him about the possibility of joining our tour and he just went on and on about how he just didn't like what GUNS N' ROSES stood for and I said to him: 'Just go out there and represent NIRVANA — just play the show and then that's it'. I pleaded with him, but he just wasn't having it. So there you have it. It would have been great if NIRVANA was part of that tour — but you know [the actual opening act] FAITH NO MORE were great as well.

"When we played Seattle on the 'The Black Album' tour, I remember calling Kurt to invite him to the show and he said to me: 'Are you guys going to play 'Whiplash'? That's my favorite METALLICA song'," Kirk recalled. "When he came to the show, he was in the snakepit [an area onstage] with Courtney Love and every time he walked by, he tried to get my attention but my head was somewhere else. He was great. I became friends with him right when the first NIRVANA album [1989's 'Bleach'] came out before people were even calling it grunge, and it's so sad when I think back to all the guy wanted to do was play guitar and write songs and sing and somehow that all got destroyed for him."

Cobain was publicly vocal about his dislike for GUNS N' ROSES, telling Seconds in a 1991 interview: "We're not your typical GUNS N' ROSES type of band that has absolutely nothing to say." The following year he told a Singapore publication: "Rebellion is standing up to people like GUNS N' ROSES."

"GUNS N' ROSES was about to do this massive stadium tour with METALLICA, and they wanted us to open," Grohl said. "So Axl had been calling Kurt nonstop. One day we're walking through an airport and Kurt says, 'Fuck. Axl Rose won't stop calling me.'"

Later that year, Cobain told the LGBT publication The Advocate that Axl was "a fucking sexist and a racist and a homophobe, and you can't be on his side and be on our side. I'm sorry that I have to divide this up like this, but it's something you can't ignore," he said. "And besides they can't write good music."

In his memoir, "Bumping Into Geniuses", NIRVANA co-manager Danny Goldberg revealed that when Rose asked to meet Cobain backstage after a show, Kurt refused.

"Rose had the kind of macho rock persona that Kurt detested," Goldberg wrote.

Even Cobain's wife, Courtney Love, was not keen on getting to know Rose's then-girlfriend, Victoria's Secret model Stephanie Seymour. After another show, Seymour asked Love, "Are you a model?" Snapped Courtney: "Are you a brain surgeon?"

Regarding the proposed tour featuring NIRVANA, METALLICA and GUNS N' ROSES, Goldberg said: "There was a lot of money on the table. Kurt really liked METALLICA." But there wasn't enough money in the world to get him to share a stage with that other band.

Back in 2004, METALLICA drummer Lars Ulrich penned a short testimonial to NIRVANA for NME in which he wrote: "In 1991 there was a kind of shift in rock music in America — it was shifting away from all the hair bands in L.A. And with Kurt Cobain, you felt you were connecting to the real person, not to a perception of who he was — you were not connecting to an image or a manufactured cut-out. You felt that between you and him there was nothing — it was heart-to-heart. There are very few people who have that ability.

"I never met him but our guitarist Kirk Hammett had a relationship with him. We were doing this tour with GUNS N' ROSES in the U.S. in 1992 and we wanted NIRVANA to come out and join us. Kirk asked Kurt, but while Cobain said he would play with METALLICA anywhere in the world, at any time, on any stage, he would not step up on the same stage as GUNS N' ROSES. Obviously he felt that Axl was the antithesis to what he was.

"As I said, I never met Kurt, and he's probably the only guy in rock'n'roll that I have never met that I really wanted to — other than Bon Scott maybe. What a sad thing we can't hear the fourth NIRVANA album. It would have been so great to be able to see how that would have evolved."