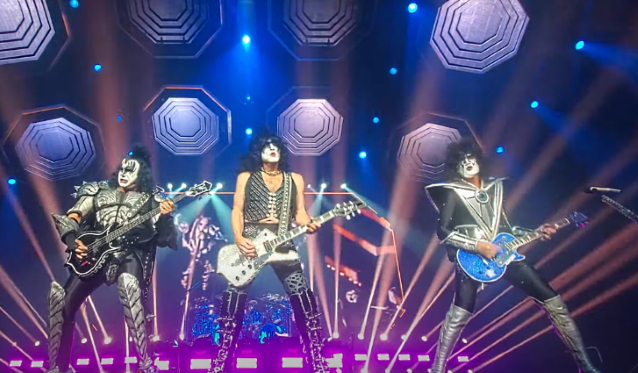 Last night's (Friday, October 8) KISS concert at iTHINK Financial Amphitheatre in West Palm Beach, Florida was postponed to Friday, November 5 "due to ongoing weather issues." All previously purchased tickets will be honored for the new date.

Weather reportedly started to deteriorate around 7:30 p.m., and officials asked the crowds occupying the amphitheater's hill to seek shelter in the covered area of the venue or even their cars as the tropical storm was about to get serious. Heavy rains and lightning continued for another two and half hours, and around 10:00 p.m., the four members of KISS came up on stage to announce the show postponement. Frontman Paul Stanley told the audience: "This is not what we expected. And it wouldn't be fair to the rest of the people who are showing up.

"We apologize. Look — we're ready. You know, 'cause you live here — this isn't safe. And the most important thing is making sure that you're safe. So we will see you November 5th.

"Drive safely, get home, come back and see us. We love you."

Earlier this month, Stanley said that the final concert of the "End Of The Road" tour will likely happen within the next year and a half.

"End Of The Road" was originally scheduled to conclude on July 17, 2021 in New York City but has since been extended to at least the end of 2022. The trek was announced in September 2018 following a KISS performance of the band's classic song "Detroit Rock City" on "America's Got Talent".

"I believe strongly by the beginning of 2023 we will be finished," Stanley told Ultimate Classic Rock in a new interview, adding that "it seems only natural [for the final show] to be in New York. That is where the band started, and that was really the background for the band getting together and writing these songs and played loft parties and played clubs starting with an audience of probably 10 people," he said. "It seems we should go full circle."

Stanley went on to say that unlike KISS's 2000-2001 tour, which was also supposed to be its last, "End Of The Road" will truly be the last time KISS performs live. "It's a different time than we had pondered [farewell tours] in the past," Stanley explained. "The fact is that, physically, it's incredibly demanding to do what we do. Look, we played [recently] in Austin, an outdoor show, 100 percent humidity. We're running around for two-plus hours, not only with guitars, but I've got 30-plus pounds of gear on. There's a point where you go, 'You know what? This is more challenge than I want.' And I only want to do it as long as I can do it smiling.

"There's really no thought about changing our minds," he continued. "It has nothing to do with personalities in the band or tensions or a difference of opinion or musicality. It's purely practical. You can play beat the clock, but ultimately the clock wins."

West Palm Beach - We are disappointed too but your safety comes first. https://t.co/7mq128yJ4Q