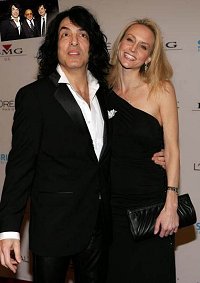 According to a posting on the KISS fan site KissNews.de, KISS guitarist/vocalist Paul Stanley was among the attendees at the annual Clive Davis pre-Grammy party at the Beverly Hills hotel last Saturday (Feb. 12) in Beverly Hills, California — one day prior to the 47th Grammy Awards. Stanley attended the party with girlfriend Erin Sutton (see photos from KissNews.de, Wire Image, Film Magic) and is said to have mingled with people like Jimmy Page, Clive Davis and former KISS songwriting collaborator Desmond Child. A recap of the evening's events from legendary rock photographer Ross Halfin follows:

"Sitting at our table is Paul Stanley, who tells me he is addicted to my website - he reads it in the middle of the night when he can't sleep (Gene Simmons probably would - if I paid him) and his girlfriend Erin. He tells [Jimmy Page] he can't tell if I namedrop him or Slash the most. The bright lighting is suddenly obscured by a figure nearly as big as the ballroom we're in. It's Steven Segal... I am not joking, he is physically HUGE. A bit like a Buddha — well, he claims to be into Eastern Religion when he is not killing 5000 people with one hand. Much to our surprise he's at our table. Paul, Jimmy and I watch him consume all of the dessert — he puts his glasses on then consumes two tiers of pastries from giant plates... I mean everything. We're all nudging each other, trying not to laugh."

One of this year's Grammy winners were MOTÖRHEAD, who were honored in the Best Metal Performance category for their cover of METALLICA's "Whiplash". The track was produced by Bob Kulick, who recently produced a KISS tribute album entitled "Spin the Bottle".