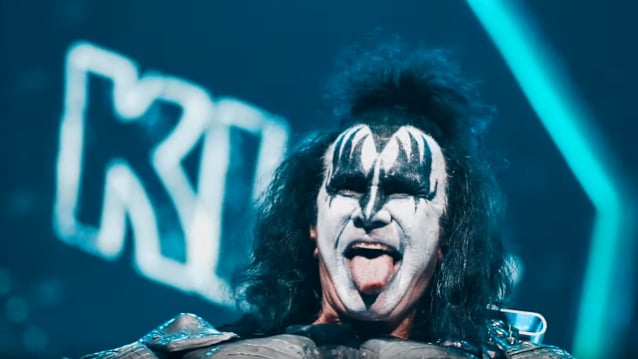 Earlier this year, Simmons — whose actual birthday is August 25 — admitted in an interview with Australia's "Sunday Night" that he gets "exhausted" while performing with KISS, but denied that it was a factor in his band's decision to call it quits after the comption of the "End Of The Road" farewell tour. "It's because of the pride that we have," he explained. "Remember, we introduce ourselves with 'You wanted the best. You got the best. The hottest band in the world: KISS.' I want those words to mean something, even until the very last show. I'm gonna be 70. Bitch, you wanna get into my outfit, you wanna step into my shoes? Ten pounds each. There'll be about 42 to 45 pounds of gear. Oh, yes, you have to shoot fire out of your mouth, sometimes out of your ass. And you're exhausted at the end of it. So, could I be in a band until my late 70s? Sure. But I'd have to join U2 or THE [ROLLING] STONES, put on a pair of sneakers and a t-shirt and just strum. But in terms of physicality, we're the hardest-working band on earth."

The rest of 2019 will see KISS playing an additional 14 concerts in North America, nine final shows in Australia and New Zealand, and five more in Japan.

KISS's current lineup consists of Simmons and fellow original member Paul Stanley, alongside later band additions, guitarist Tommy Thayer (since 2002) and drummer Eric Singer (on and off since 1991).