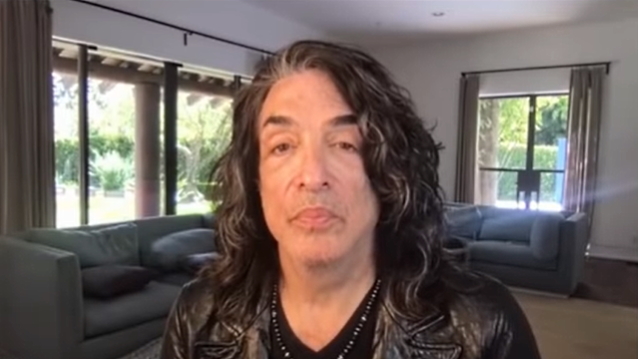 KISS frontman Paul Stanley has once again said that it's still possible that original members Ace Frehley and Peter Criss will make guest appearances during the band's "End Of The Road" tour.

In the two and a half years after KISS announced its farewell tour, fans have wondered openly if Frehley and Criss would be involved in the trek, especially considering the apparent recent goodwill between Stanley and Gene Simmons and Frehley. Ace's latest collection of original material, "Spaceman" — a title suggested by Simmons himself — features two songs the pair wrote together, and the duo completed a joint summer 2018 tour of Australia, after which Frehley fired his solo backing band and hired Simmons's.

Paul continued: "If there is a way to include them in celebrating the final tour, yeah, I'm open to it. It has to make sense and it has to feel right, because the band has existed far, far, far too long without them to let anybody spoil this or make it less than it should be. If there's no joy in it, I'm not interested."

In April 2020, Ace said that he was up for a reunion of the original KISS lineup, but only if the price was right. "Everything's cool," he told SiriusXM's "Trunk Nation with Eddie Trunk" about his relationship with Stanley and Simmons. "What's gonna happen is gonna happen. But everything is delayed at this juncture, so who knows? … I'm doing my own thing. Unless they come forward and the price is right, you're not gonna see me anywhere close by."

Three years ago, Frehley told VintageRock.com that "the only way" he would "seriously consider" taking part in "End Of The Road" is "if I took back my make-up and costume and my character — which I designed." He added that current KISS guitarist Tommy Thayer "is not a bad guitar player, but he basically just mimics everything I wrote, and tries to imitate my persona. He's been doing it for 15 years," he said. "But the reality is I'm the original guy. And nobody can really copy the way I play guitar."

KISS's current lineup consists of original members Simmons and Stanley, alongside later band additions, Thayer (since 2002) and drummer Eric Singer (on and off since 1991).