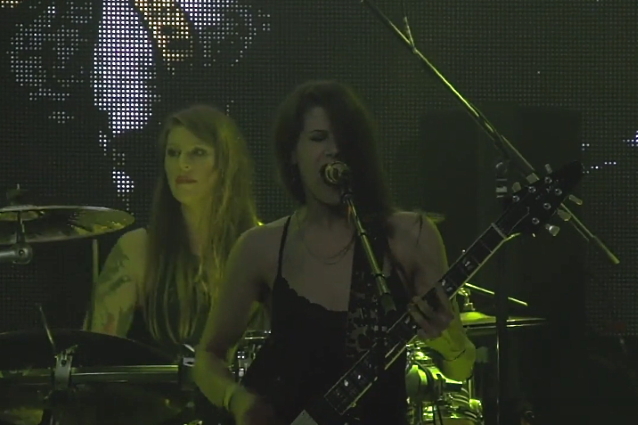 KITTIE Rehearses For First Time In Five Years: 'The Feeling Is Unbelievable'

KITTIE guitarist/vocalist Morgan Lander and drummer Mercedes Lander held their first rehearsal together since 2017 over the weekend. Earlier today, a short video of the session was posted on the band's Instagram, and it was accompanied by the message: "We look like we're jamming at a construction site! This is the first time we've played together like this in 5 years. The feeling is unbelievable! #whatialwayswanted #underconstruction #kittie".

Last month, Morgan confirmed to Anne Erickson of Audio Ink Radio that KITTIE will play more shows beyond the already announced appearances at the Blue Ridge Rock Festival in September and at the When We Were Young festival in October. "That's it for this year," Morgan said. "But next year, we definitely will. But I think those opportunities will come later on.

Joining Morgan and her sister Mercedes at the above-mentioned shows in the fall will be guitarist Tara McLeod and bassist Ivana "Ivy" Vujic.

Asked in a recent interview with the "Talk Toomey" podcast what led to Vujic returning to KITTIE for the upcoming dates, Lander said: "Ivy played on two of our albums, the last two albums that we did. She left the band right before the very last big tour that we ended up doing; she did the Soundwave Festival [in Australia] with us in 2012, and those were the last shows that we did with her. And she just kind of settled into her life, started a family, got married, and so that's sort of been what she's been up to. But Ivy's a metal girl at heart and she's always been super, super easygoing about stuff. I just sent her a message and I was, like, 'Hey, can we talk?' And we had a really, really great phone call and I just sort of explained the situation, explained what was going on. I asked her if she'd be into doing it, and she was, like, 'Yeah. Sounds great.' … It's very much one of those things where you don't talk that often anymore, you don't see each other that often, but then, when you all get together again, that chemistry and that vibe is always there."

When the lineup for When We Were Young was first revealed, KITTIE said: "Thanks for your patience with our silence friends. The truth is we've been in full on crisis mode the past week and weren't sure if we'd actually be able to make this happen but it's true and we'll be there to melt your face off and we hope you got your tickets."