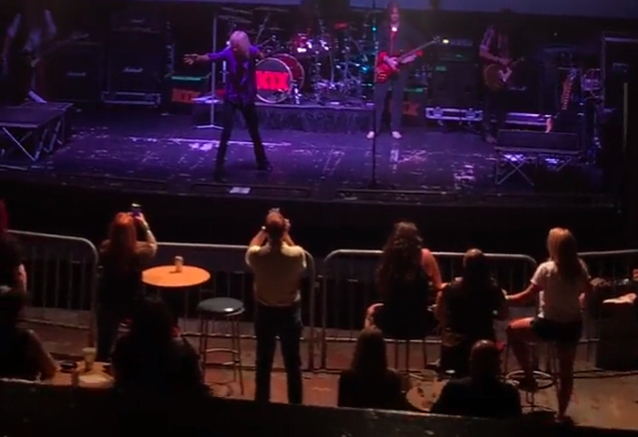 Veteran Maryland rockers KIX played their first "socially distanced" concert Friday night (July 24) at a private party in front of 50 people. The show took place at Tally Ho Theater in Leesburg, a town in Northern Virginia, which entered Phase 3 of its reopening plan on July 8, and is allowing performing arts venues to reopen with half capacity indoors.

On Saturday, KIX took to its social media to share video of the performance, and it included the following message: "Our first social distancing gig! We haven't played in four months. Private party at Tally Ho Theater in Leesburg VA. The venue did an outstanding job adhering to state guidelines. Temperature checks AT THE DOOR, no more than 50 people allowed, all venue staff wearing masks at all times, KIX crew wearing masks, KIX band wearing masks when not performing, hand sanitizer everywhere, stand up tall tables six feet or more apart with no more than four at each table, all patrons wearing masks, catering for the band was no contact, and we had a great time being able to play again and the fans had a great time! This was a dot your I's and cross your T's way to conduct a live show in the post COVID, pre-vaccine world and we are proud to be a part of it!"

As states across the country enter the next phases of reopening, nightclubs and music venues are near the end of the list of places allowed to resume normal operation. In the face of the coronavirus pandemic, thousands of concerts and festivals have either been postponed or canceled, as social distancing and self-quarantining make performing live music and attending live shows all but impossible.

KIX was founded in 1977 and released its first, self-titled album on Atlantic Records nearly 40 years ago. Their breakthrough came with 1988's "Blow My Fuse", which sold nearly a million copies, thanks to "Don't Close Your Eyes". The band continued to ride the hard-rock wave until 1995, when KIX took a hiatus. Nearly 10 years later, KIX reunited and started touring regionally. A 2008 performance at the Rocklahoma festival led to more gigs and the release of a live DVD/CD called "Live In Baltimore" in 2012.