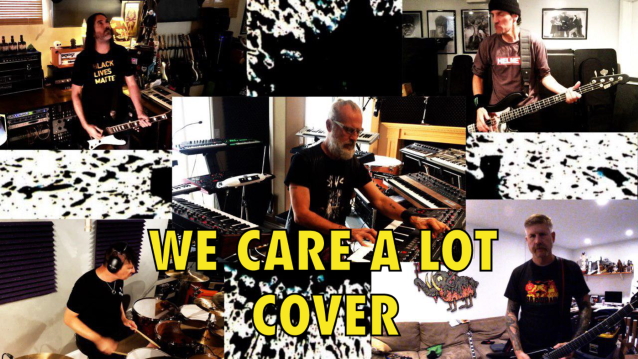 KORN, ANTHRAX And MASTODON Members Cover FAITH NO MORE's 'We Care A Lot'

SLAVES ON DOPE's Jason Rockman and Kevin Jardine present a brand-new cover project called THE KINGS OF QUARANTINE alongside a veritable who's who of rock and rap artists. Their first release is a song from one of the most celebrated modern rock bands, FAITH NO MORE, with a rendition of "We Care A Lot". The video features a myriad of artists such as Frank Bello (ANTHRAX),Ray Luzier (KORN),Bill Kelliher (MASTODON),Ivan Doruschuk (MEN WITHOUT HATS),Dennis Lyxén (REFUSED),Walter Shreifels (QUICKSAND),Kevin Sharp (BRUTAL TRUTH),Darryl McDaniels (RUN-D.M.C.),Esoteric (CZARFACE),Richard Patrick (FILTER) and Raine Maida (OUR LADY PEACE). The video also features a guest appearance from FAITH NO MORE's founding member and bass player Billy Gould delivering a special message.

The project came together after a discussion between Jason and Bill about possibly doing a cover song together. Jason then went back to his longtime music partner Kevin Jardine and picked their favourite band FAITH NO MORE with the song "We Care A Lot".

"Kevin and I have always been massive fans of FAITH NO MORE, and having the opportunity to cover one of their songs with such great company has been a dream come true. We are so grateful to all the musicians involved that accepted our invitation," says Rockman.

The music industry has been severely touched by the unprecedented COVID-19 crisis. Artists, creators, and musicians have had to find new fun ways to remain sane in the creative sphere.

"We did this because we care a lot about everyone! Especially those who put their lives on the line to make sure we are okay," adds McDaniels.

"I care a lot about being part of this amazing cover. It's an honor and a privilege. To be rubbing elbows with the likes of these gentlemen makes me feel very proud," says Patrick.

A digital version of the song is available for purchase. One hundred percent of the profits will be donated to Roadie Relief, a fundraising effort to support qualifying roadies who have submitted an application for financial help.