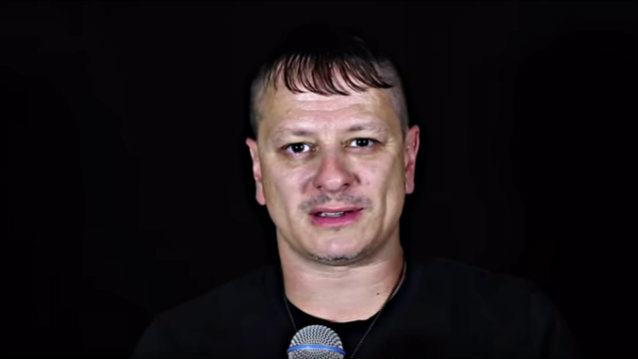 Although KORN drummer Ray Luzier has not suffered directly from anxiety and depression, he has witnessed people close to him and other musicians who have battled mental-health issues and have turned to self-medicating in destructive ways.

Speaking with The You Rock Foundation during KORN's summer 2017 tour, Ray wanted to express his empathy and compassion for others by offering words of support as well as strong statements of positive ways to push through feelings of anxiety and depression.

"[Early on in my career] I went to Los Angeles to go to a music school, and right away when I went to the music school, I saw a lot of drugs and I saw a lot of pot and I saw a lot of people just there for the wrong reasons," Ray said (see video below). "And I've always been there for a hundred percent music; I wanted to better my craft, I wanted to get better at playing. So I decided, every time I'd go to a party and I'd see people partaking in these actions, in these activities, I decided not to do it, because I saw the repercussions — I saw the next day how hung over they'd be — and, to me, it wasn't fun.

"I was the geek that was going to the practice lab and practicing and getting better at my instrument," he continued. "And I just made that decision at a very young age that… I saw what it did to people and I saw a lot of divorces from my friends, I saw a lot of bands break up, I saw a lot of bank accounts being drained — a lot of really bad things because of substance [abuse]. So I'm one of the few rock and rollers that's a lifer — and I will be doing this till the day I die — that has never taken a drug. And only for that reason, I saw what it did to other people.

"I have a very addictive personality, and, to be honest, I'd probably love [laughs] a lot of the things out there, a lot of the bad things out there," he admitted. "So my whole theory has always been: if you don't start it, you don't have to stop it. And that, to me, is a very important thing. That has to do with cigarettes, pot, drugs, anything that's not good for your body. That was my whole theory, and I still live by it to this day. So anyone out there that's maybe hasn't tried anything that's thinking about, I'm living proof that you can be around shady situations or maybe not the most healthiest situations and you can still say 'no' and you can still get away from it and live your life and be even happier.

"To me, music has always… My whole thing was no drug would ever take you any higher than music, and that's something that I clearly believe in. Because when I go to a concert or if I put my favorite record on, the feeling that I get and the emotions that I get, no drug or no substance or no artificial substance is ever gonna take that place."

First-call touring and session drummer, Luzier is known for his high-profile gigs with David Lee Roth, Jake E. Lee and ARMY OF ANYONE, and has been a member of KORN since 2007. From movie soundtracks to rock and metal albums, Luzier's playing can currently be found on over seventy recordings. As an educator, he was a Musicians Institute instructor for over ten years and author of a well-regarded, self-titled instructional DVD.

KORN is continuing to tour in support of its latest album, "The Serenity Of Suffering", which came in October 2016. The follow-up to 2013's "The Paradigm Shift" was helmed by Grammy Award-winning producer Nick Raskulinecz, who has previously worked with FOO FIGHTERS, DEFTONES, MASTODON and RUSH, among others.