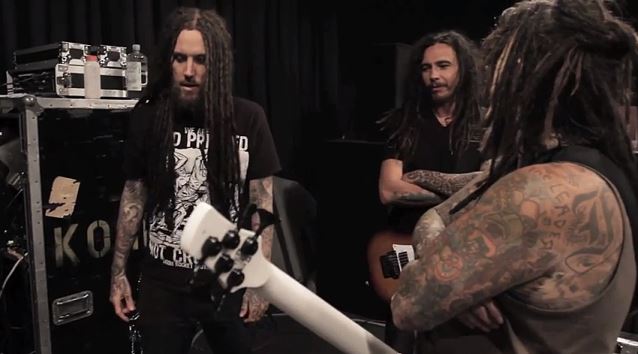 Video footage of KORN getting ready for their first tour with original guitarist Brian "Head" Welch back in the band after an eight-year hiatus can be seen below.

KORN will be inducted into Guitar Center's RockWalk on Sunset Boulevard in Hollywood, California on October 8, the same day that the band releases its 11th album, "The Paradigm Shift".

In an interview with AltSounds, KORN singer Jonathan Davis was asked if "The Paradigm Shift" was the band's way of trying to appease KORN's hardcore fans after the dubstep influence on the last CD. "We wanted to do what we do best," he said. "Yes, we love our fans, but we're not trying to make the same record over and over. Sure, when we write certain parts we say to each other, 'The fans are gonna go crazy here,' but the fans that are the most vocal about it, if we paid attention to that all the time, we'd just be making the same thing over and over."

Speaking about Welch's return to the group, Davis said: "It was good to have him back, and it opened up the opportunity for Head and Munky to do what they're so good at. You know, playing off each other. So, it just clicked as if no time had passed. It was great to have our brother back again. With him being back and everything… it really worked."