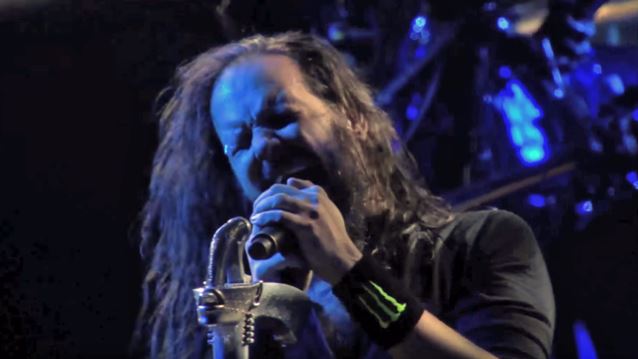 KORN Frontman: I Spend More Time In A Dark Place Than I Do In A Happy Place

Blank Slate Creative recently conducted an interview with KORN singer Jonathan Davis. You can now listen to the chat in the YouTube clip below. A couple of excerpts follow (transcribed by BLABBERMOUTH.NET).

On the title of the new KORN album, "The Serenity Of Suffering":

Jonathan: "Usually my man Munk [KORN guitarist James 'Munky' Shaffer] comes up with album titles, 'cause he's really good at it; he gets fifty different titles together and we all pick one. But this time, I just felt this one that I came up with just really nailed what I was going through when I was writing the record. It's a place I always go to; it's the inspiration when I'm writing music. It's called 'The Serenity Of Suffering', and that title means that I've always battled dark feelings in my life, and I've been there so much that I feel more comfortable there than I do when I'm in a happy spot. I'm not saying that I don't enjoy being happy, 'cause I do; I've got lots of things to be happy about. I have a beautiful family, I get to tour the world and do what I love. But I spend more time in that dark place than I do in a happy place, so the title just wrapped up what I was going through with the record and [the themes covered in] the lyrics."

On working with Grammy Award-winning producer Nick Raskulinecz, who has previously worked with FOO FIGHTERS, DEFTONES, MASTODON and RUSH:

Jonathan: "Nick really captured the band. He's an amazing producer. Sonically, he made this band sound heavier than it's ever sounded. I think he walked into the recording studio when the guys were writing on a mission to bring out that heaviness back into KORN. And I think between him and Munky and Head [KORN guitarist Brian Welch], they achieved that. And with me, he came out to Bakersfield, to my studio, and he really pushed me and wouldn't let me just say, 'I don't wanna do that song,' that I wasn't necessarily feeling that. He's all, 'It's a good song, man. You've just gotta keep at it, keep trying.' And he really pushed me to to the point where I actually came up with some really interesting stuff on the songs."

According to music industry web site Hits Daily Double, "The Serenity Of Suffering" is likely to sell between 40,000 and 45,000 copies in the United States in its first week of release. The SPS figure is expected to be between 45,000 and 50,000.

"The Serenity Of Suffering" features a guest appearance by SLIPKNOT frontman Corey Taylor on the song "A Different World".