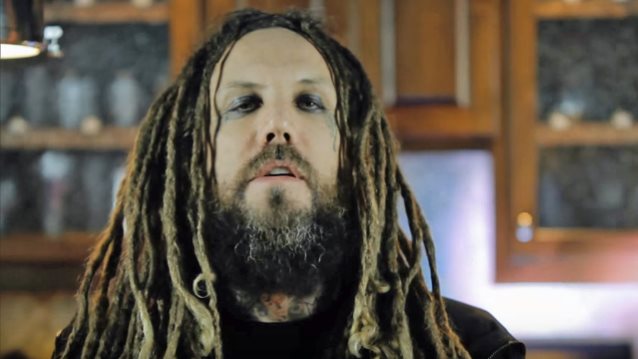 KORN Looking Ahead To 20th Anniversary Of 'Follow The Leader,' New Album

According to The Pulse Of Radio, KORN guitarist Brian "Head" Welch was asked in a new interview with Good Company if the band has any plans to perform its 1998 breakthrough album "Follow The Leader" in full next year, since the LP — widely considered KORN's finest — turns twenty years old on August 18, 2018. Welch responded: "It's gonna be the twentieth anniversary of this record next year. [It came out in] '98, so 2018 [is twenty years later], yeah, so we're talking about celebrating this record somehow. But I don't know."

Welch also spoke about the band's plans for its thirteenth studio album, which will follow last year's "The Serenity Of Suffering". He remarked, "The next record we're talking about doing, you know, I think it's gonna be a combination of maybe both ['The Serenity Of Suffering'] and [2013's 'The Paradigm Shift']. We'll try some new stuff though, but we're gonna definitely focus on guitars again."

Welch added that the next KORN album will be a more collaborative effort compared to the last two outings.

"Me and Munky [James Shaffer, guitar], we put in the most hours with the band," he said. "Jonathan [Davis, vocals] , he said he's gonna spend more time writing with us this record. 'Cause he just came in, the last two records that I've been back [in the band], came in at the last… Like, when we're done, he says, 'Gimme the songs when you're done and I'll write lyrics.' He's gonna come in and be involved with the music now. So I think we'll have a good record, an even better record this time around, because everybody [will be] involved [in writing]."

Munky told The Pulse Of Radio that the band has changed a lot since recording its first album. "We're so different now," he said. "I think most of us are [more] mature than we were back then. It's kind of fun to just see how we react to some of the old songs when we play 'em, and it does bring back memories. But there's some memories also that aren't so good."

KORN will appear at Knotfest Mexico in Toluca, Mexico on October 28, along with STONE SOUR, A PERFECT CIRCLE and others. The night before, on October 27, Davis will take part in LINKIN PARK's tribute concert to Chester Bennington at the Hollywood Bowl.