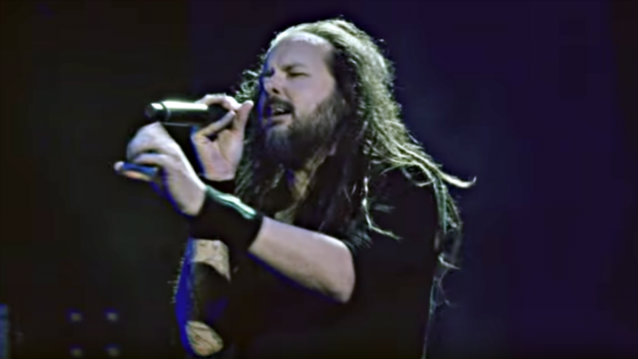 KORN played a brand new song called "Rotting In Vain" live for the first time during their concert on July 16 at the Chicago Open Air festival at Toyota Park in Bridgeview, Illinois.

Professionally filmed video footage of the performance can be seen below.

KORN frontman Jonathan Davis told Rolling Stone about the track: "'Rotting In Vain' was written about being in that black place, being in situations that I don't like in life — be it relationships, or feeling when you're stuck and you're just being abused or you don't like where you're at, and you just sit there and rot. It takes you years and years to figure out how to claw your way out. That's where 'Rotting In Vain' came from. I'm just sitting there, fucking dying and letting it happen for years and years and not helping myself to get out of that place. That's the vibe that inspired the song."

"Rotting In Vain" is taken from KORN's upcoming album, "The Serenity Of Suffering", which will be released on October 21. The follow-up to 2013's "The Paradigm Shift" was helmed by Grammy Award-winning producer Nick Raskulinecz, who has previously worked with FOO FIGHTERS, DEFTONES, MASTODON and RUSH, among others. The CD features a guest appearance by SLIPKNOT frontman Corey Taylor on the song "A Different World".

"The Serenity Of Suffering" marks the band's return to Roadrunner, which previously released 2010's "Korn III - Remember Who You Are" and 2011's "The Path Of Totality".

"The Serenity Of Suffering" track listing:

The cover art for "The Serenity Of Suffering" was created by acclaimed artist Ron English. It depicts a teenage KORN fan at a dystopian acid-nightmare funfair who is clutching a disembowelled and skeletal version of the doll who adorned 1999's "Issues".

"The Serenity Of Suffering" marks the second KORN album since the return of guitarist Brian "Head" Welch, who said, "This is a record to me that the intensity of KORN is back, and the live energy. Raw energy is there."

KORN's co-headlining tour with ROB ZOMBIE, "Return Of The Dreads", kicked off on July 19 in Englewood, Colorado. That trek winds down on September 3 in Bristow, Virginia.