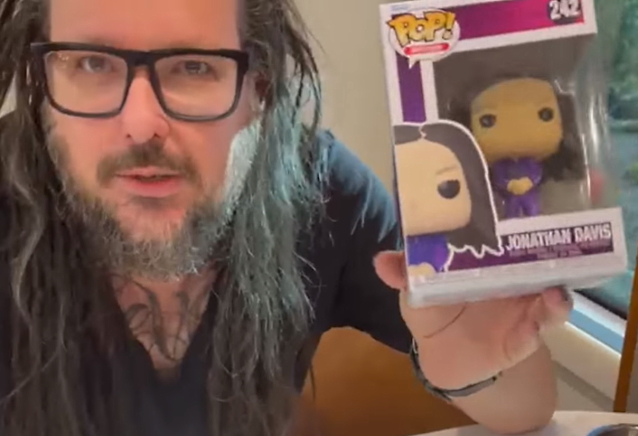 A short video of KORN singer Jonathan Davis unboxing his figure from the popular vinyl collectible company Funko — best known for its big-headed Pop! figures — can be seen below.

In the clip, Davis says in part: "When they came to me, we came up with the packaging, the box and the look for this little guy, 'cause we wanted to start it off where it all began. This is around 1997, [the second KORN album] 'Life Is Peachy', and I [wore] the purple sequined jumpsuit. We had a problem — we couldn't get it shiny 'cause there was no kind of paint, so they kind of made little dots to represent the sequins. But I really, really dig this. This is cool."

Earlier this year, Funko said it took a majority stake in TokenWave, which develops an app and website for "showcasing and tracking" Non-Fungible Token holdings. In addition, Funko is trying to expand its e-commerce and international businesses. It said it also plans to grow its other main business Loungefly, which sells handbags, clothing and other accessories.