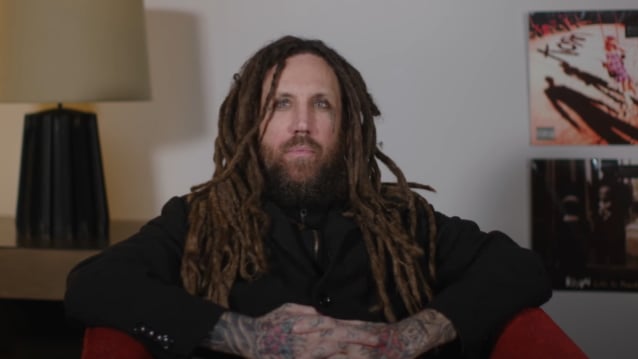 KORN's BRIAN 'HEAD' WELCH: 'Am I Still A Christian?'

KORN guitarist Brian "Head" Welch has once again clarified his recent comments about Christianity, insisting that he was only referring to the fact that he was "overzealous" and "obnoxious" with his faith when he first became a Christian.

During a March 2021 appearance on MACHINE HEAD frontman Robb Flynn's "No Fuckin' Regrets With Robb Flynn" podcast, Welch — who left KORN in early 2005, at the same time announcing that he kicked his addictions to drugs and alcohol by becoming a born-again Christian — spoke about the impact his new awareness has had on his life, his family and the influential rock act that he co-founded nearly 30 years ago. Asked if he thinks religion became his "new addiction" after his exit from KORN, Welch said: "The crazy thing is I had an experience with something from another dimension. And it wasn't the religion — going to church and being a good boy — it was, like, I felt something come into my house, and I can't explain it to this day. But I believe that it was Christ doing something in me. So that was real — that was very real. But yes, I think I went too far with it. And I got obsessed with it, just like I was obsessed with the drugs. I believe I did, for sure. And I had to come out of that and find normalcy, because there's nothing worse than a freakin' irritating religious person just shoving it down your throat — there's nothing worse than that. And you saw it on the documentary ['Loud Krazy Love', which documents Brian's journey towards sobriety], Jonathan's [Davis, KORN singer], like, 'I hate those motherfuckers.' People can't stand 'em. And for years, we've had those Christians outside of KORN concerts, saying KORN's of the devil, and all this. It's crazy — it's a crazy thing. But I'm just glad I got through it. And I'm glad that I am who I am now, and I have a lot of peace and rest for my soul. I feel very leveled and at peace with myself."

Welch addressed the negative feedback he received for his "No Fuckin' Regrets" comments in a new video uploaded to his YouTube channel. In the three-minute clip dubbed "Am I Still A Christian?", Welch said (as transcribed by BLABBERMOUTH.NET): "The Christian news media and other web sites and stuff, especially the Christian side, there's been a lot of stories about Christian musicians renouncing their faith. So it's really good for clickbait. A lot of these media outlets took it and listened to it and thought that I was renouncing it. So it was definitely taken out of context.

"When I first became a Christian, I was coming off of methamphetamines, first of all, and I had a massively powerful encounter where God was revealing himself to me. And so those two sides of the coin — coming off of meth and a powerful encounter — I didn't know how to react and I just went out and I was overzealous, I was obnoxious with my faith, and it took me a while to bring it down. So that's all I was trying to say in that video, in that podcast with Robb Flynn.

"I still share my faith, my personal stories of things that I go through in a non-religious way, I feel like," he continued. "I try to be very spiritual, but non… Like, 'This is this, this is how it's helped me, da da da.'

"My manager hit me up and he's, like, 'Hey, I think you should address this because I think people are really starting to believe that you renounced it.' And I was, like, 'All right. All right. I'll post about it.'

"But that kind of stuff doesn't get to me at all anymore," Welch explained. "It's just, like, whatever. People can twist your words however they want. I have an amazing relationship with God and I know where that stands. So I'm very confident in that, so I don't gotta really worry about it for temporary controversy."

Less than a month after leaving KORN, Welch — wearing a white robe and sporting a long beard — was baptized in Israel's Jordan River, along with about 20 other members of the Valley Bible Fellowship, the Bakersfield, California, church in which he spoke two weekends earlier. At the time, Brian told MTV News that he decided to be baptized in the Jordan after receiving a divine message.

"God told me ... he didn't say, 'Hey Brian!,' I just got a feeling in my heart that he was going to let me know something, I was going to be told something [in Israel]," Welch said. "Because the pastor is going to dunk me in the Jordan River, and when I come back here, I'm going to be a different person."

Welch officially returned to KORN in 2013, one year after joining the band onstage at the Carolina Rebellion festival in Rockingham, North Carolina to perform "Blind".

Since his conversion to Christ more than 16 years ago, Welch has been very open about how God changed his lifestyle and restored his relationship with his daughter.

In recent years, Brian has been preaching that people don't have to wait until they die to see if having an encounter with the presence of God is real.

Both Welch and KORN bassist Reginald "Fieldy" Arvizu have had highly public, though separate, conversion experiences, ones that have been greeted with a certain amount of skepticism.

Earlier this year, Welch spoke to the "TruthSeekah" podcast about the backlash he received from Christians who lashed out at the guitarist for supposedly backing away from his faith. "This one guy said… I saw one [video] clip a friend sent me," Welch recalled. "And he's, like, 'Getting a lot of messages about this.' And [the video] was [dubbed], 'Brian Welch quits Christianity,' or something like that. It got thousands of views. The clip that I saw, the guy goes, 'I will be so bold as to say Brian Welch was never a Christian.' I'm just, like, 'Dude.' … I'm thinking about this guy, and I'm going, 'You really have the cojones to say that? That's putting yourself up with God's level.' And so I'm kind of scared for this guy. He's just like so far off. Man… That's messing with things, man, that you shouldn't mess with. That is the number one thing that Jesus went after with the Pharisees in the Gospels. He was so irate and so against that spirit — judgmental spirit — and this and that, and Jesus is with the prostitutes, saying 'Come to all who are broken.' And this guy is saying that? Wow. That's gonna be an interesting conversation. Honestly, I saw that, and I just said, 'Lord, have mercy on this guy. He doesn't know what he's doing. Have mercy on him. And where I'm in the wrong, fix me too.' I'm just trying to take the humble approach. But that's how I feel. And it was a little sad, but not a big deal."

KORN will embark on a headlining tour in March with support from CHEVELLE and CODE ORANGE. Produced by Live Nation, the 19-date arena trek will begin on March 4 in Springfield, Missouri and make stops in Greensboro, Providence and Albany, among other cities, before wrapping up in Wichita, Kansas on April 1.