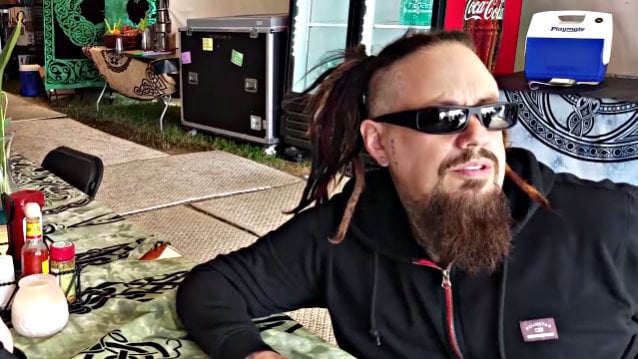 KORN bassist Reginald "Fieldy" Arvizu says that Tye Trujillo, the 12-year old son of METALLICA's Robert Trujillo and member of NorCal group THE HELMETS, did an "amazing" job filling in for him for KORN's South American tour after he was unable to make the shows due to "unforeseen circumstances."

Speaking to 93.5 The Beach's Leah at this year's Carolina Rebellion festival, Fieldy said (see video below): "[The other members of KORN] went to South America [without me]. They did seven shows down there. Tye Trujillo filled in for me. Twelve years old, and he killed it — they told me he just nailed it. A living little rock star right there."

Asked if he gave Tye any pointers before the start of the tour, Fieldy said: "I didn't need to give him any pointers. His dad, Robert from METALLICA, was with him right there coaching him along. He went on tour with him. So it was amazing."