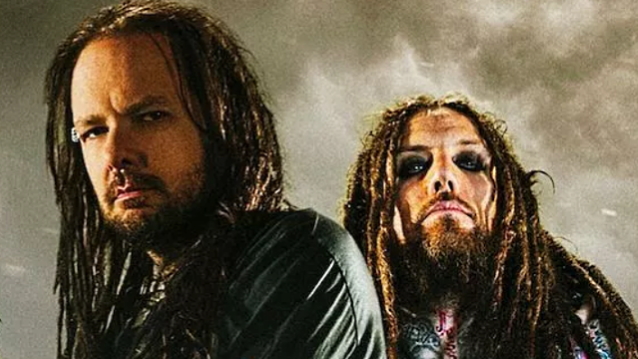 KORN's JONATHAN DAVIS Has 'No Problem' With HEAD's Faith: 'Just Don't Throw Your Views On Me'

KORN frontman Jonathan Davis spoke to Mistress Carrie of the WAAF radio station about his appearance in the first feature-length documentary about his bandmate, guitarist Brian "Head" Welch. "Loud Krazy Love" is Welch's story of faith-based redemption and Davis's skepticism about Welch's spiritual awakening helps to provide balance in the movie, which debuted in May 2018 at the Dallas International Film Festival.

In the film, Davis is particularly blunt about his feelings toward religion. While he is happy that religion has helped Brian come to terms with his issues, the singer criticizes what he views as the assimilation tactics of Christian recruiters.

"I don't buy into that bullshit, and they all fucking know it," Davis told WAAF (see video below). "Don't even try to do that to me, 'cause I'll shut your ass down in two seconds.

"If you look at it, it's pretty fucking funny how they believe and how they act," he continued. "It's ridiculous. I think [Head] agrees with a lot of what I was saying. It wasn't to be mean; it's just real and it's true.

"I respect anyone's beliefs, but when it's radical, like some of those people, I don't like that. And the whole way everything happened, I was just being real, and everybody liked that.

"I have no problem with [Head's faith]; it's just the religion in general," Davis added. "I have no problem. I'm glad that something could get him out of his dark hole and dark place. So I totally respect that. And if people need that, fine. Just don't throw your views on me. That's the only problem I have. Don't push what you believe on me. I'm not doing it to you. So get the fuck back."

Last year, Welch told Billboard that he loved the fact that Jonathan spoke his mind in the film. "He just was honest, whether it offended me or the guys doing the movie," he said. "We just wanted him to share his feelings on everything. When he talked about me going back and all these things that I was saying, he's like, 'Man, that's not God telling you; that's your head telling you.' I think it's good because that's a lot of what people think, and it was good to have his opinion. And you know what? Family can have different beliefs and different things going on. And what do you do? Do you leave your family because they believe something different? No, you stick it out and you stick together and you work out life."

Both Welch and KORN bassist Reginald "Fieldy" Arvizu have had highly public, though separate, conversion experiences, ones that have been greeted with a certain amount of skepticism.

KORN's new album, "The Nothing", will be released on September 13 via Roadrunner/Elektra. The follow-up to 2016's "The Serenity Of Suffering" was once again produced by Nick Raskulinecz.

KORN kicked off its co-headlining tour with ALICE IN CHAINS on July 18 at Austin360 Amphitheater in Del Valle, Texas.