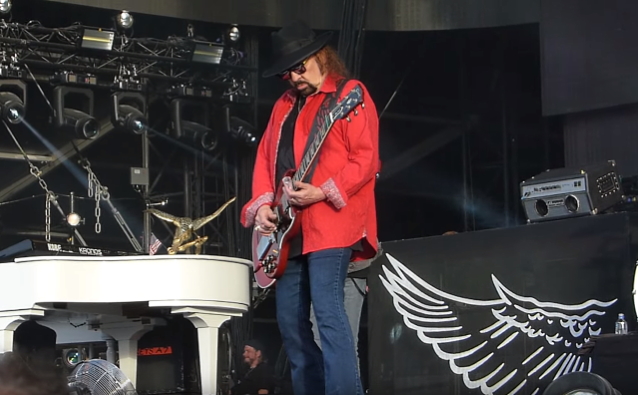 The shows, originally scheduled for August 16 in Las Vegas, Nevada and August 17 in Wheatland, California, will now take place on October 18 and October 19, respectively.

The 67-year-old guitarist and last remaining original member of LYNYRD SKYNYRD underwent surgery to fix a leaky heart valve on July 31 and is expected to make a full recovery.

"We all appreciate the well wishes for Gary and apologize for any inconvenience this may have caused," LYNYRD SKYNYRD singer Johnny Van Zant said in a statement. "But he can't wait to come back and perform at 100 percent for the fans. We will see you all soon!"

The Las Vegas and Wheatland shows are part of LYNYRD SKYNYRD's "Last Of The Street Survivors Farewell Tour", which is scheduled to run through the fall.

Rossington suffered a heart attack in 2015, prompting several of the band's concerts to be canceled. He also underwent quintuple bypass surgery back in 2003 due to coronary artery disease.

Rossington told the Tampa Bay Times his doctors have urged him for years to quit touring. "I've had heart attacks on stage," he said. "That's why I was calling it a farewell tour. I don't know if I'll be here [much longer]. I don't want to just say, 'Well, we're never going to end,' because I don't want to die and then it end that way — which is a heavy thing to talk about, but I have to."

Rossington survived the 1977 plane crash that killed singer Ronnie Van Zant and guitarist Steve Gaines. The band reunited with Ronnie's brother Johnny Van Zant as singer in 1987 and has been on the road ever since.