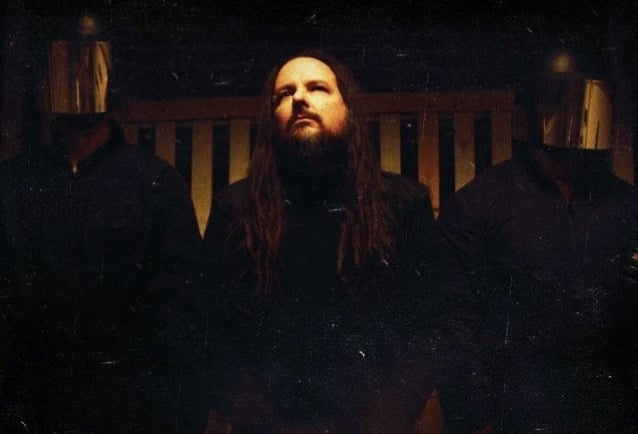 KORN frontman Jonathan Davis has released the country version of his solo single "What It Is". The original song was included on his debut solo album, "Black Labyrinth", which came out in May 2018 via Sumerian. It also appeared on the soundtrack to a film called "American Satan", which arrived in January 2018.

The solo music represents a natural step for the Bakersfield, California singer, songwriter, composer, producer, and multi-instrumentalist. Davis quietly compiled ideas for what would become this solo effort beginning back in 2007. Writing and recording on the road, he personally contributed guitar, keys, and anything else he could get his hands on to the record. Moreover, the music was primarily recorded live, a departure from KORN's heavily calculated, meticulous, studio approach to creation.

Inspired in part by the Ganzfeld Experiment, and the out-of-body experiments and hallucinations that often accompany it, Davis focused on religion, consumerism and apathy throughout the album.

"There's a level of enlightenment I want to achieve," he confessed regarding "Black Labyrinth". "With all of the bullshit going, everyone is stuck on their fucking cell phones. This takes us way out of that. No matter how hard you try to fight bad things in your life, life will be what it is. It's up to you to accept that, combat it, and move forward, or it's up to you to be in denial. Then it becomes a thorn in your side until you finally deal with it. This is it. Just deal with it."

Davis told Express & Star about "Black Labyrinth": "I've been waiting 11 years for this to come out. It's really good to finish something which I started so long ago. It's something I'm really proud of. I've been very patient with it. It's been sat on my laptop for many years, so it feels really good to be able to finally release it, to talk about it and play it live."

Asked why he chose to make a solo record instead of using the material for KORN, Jonathan said: "'Cause it's completely different — it's not for KORN. You've heard 'What It Is' — that's not a KORN song. So this is stuff that's completely different. There's stuff I've brought to KORN before, like from these sessions, the song 'Take Me', on [2016's 'The Serenity Of Suffering'], was one of these songs, but we took it and the guys — [KORN guitarists] Head and Munky — got it, they tore it apart and made it their own. It's totally different. Sometimes it works. But the majority of the stuff wouldn't have worked for KORN."

Very excited to release my alternate country version of “What It Is” – streaming everywhere now: https://t.co/nDsD5k7Wlcpic.twitter.com/lv1gSagAFo