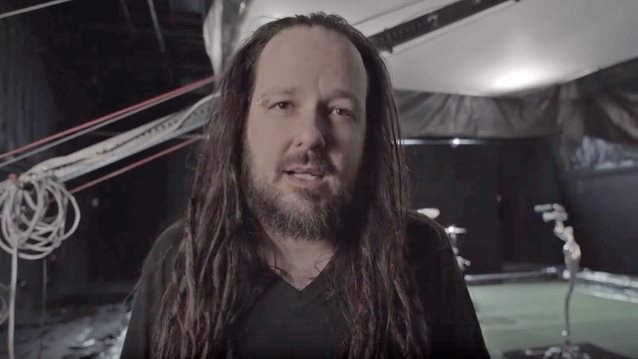 During a recent interview with "A.D. On The Radio", KORN frontman Jonathan Davis was asked how he first got into rock music. "LED ZEPPELIN [through] my aunt," he said (hear audio below). "I [remember] it vividly. I was, like, three or four years old and she would dance around… It was 1974 or something like that, and she would dance around her apartment [to] 'Whole Lotta Love', and that was the first time I heard rock music that I liked. What my stepdad was listening to was more like DOOBIE BROTHERS and that kind of stuff. And then it just grew from there.

"I wasn't really into rock," Davis admitted. "I got into rock… [I discovered] some metal stuff… First, I bought MÖTLEY CRÜE 'Shout At The Devil' [when I was in] seventh grade. So 'Shout At The Devil', when that came out, DIO 'Holy Diver', all that, and then my dad became a born-again Christian and he took it and burned it… I dug the stuff, but I didn't really dig-dig it. I found this band called MINISTRY. And that album that came out was 'Twitch'. It was right after they were doing their new romantic phase. The heavy stuff I listened to was more industrial, like SKINNY PUPPY, old goth stuff like CHRISTIAN DEATH and that kind of stuff. So that was what I was into — the industrial stuff, new romantic stuff, DURAN DURAN, all those bands. And I didn't really get into metal at all.

"The metal record that made me wanna do heavy music was 'Vulgar Display Of Power' by PANTERA. When that came out, I was, like, 'That's so heavy. And the groove…' It spoke to me. 'Cause I like funk, I like rhythms. I was really into New York freestyle music, disco back in the '80s — all that stuff. I was into underground dance music and Chicago Wax Trax and industrial. That was my thing — more underground stuff."

Davis's solo album is tentatively due this spring via Sumerian. The effort is expected to include the song "What It Is", which was released in January.

Listen to "Jonathan Davis" on Spreaker.
Find more on Korn