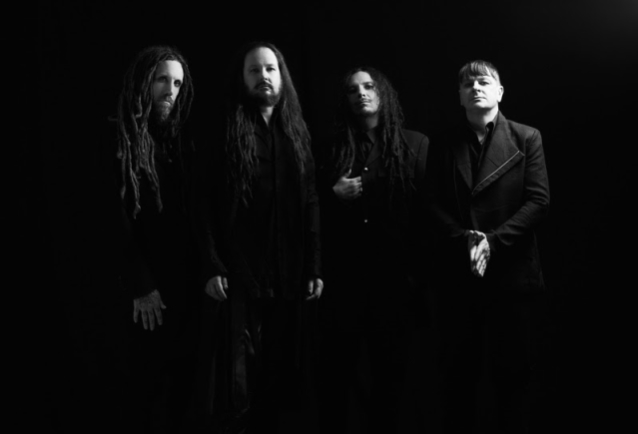 KORN's MUNKY On His Songwriting Chemistry With HEAD: 'We've Discovered Strengths That Each Of Us Has'

In a recent interview with the WSOU radio station, KORN guitarist James "Munky" Shaffer spoke about the songwriting chemistry between him and the band's other guitarist, Brian "Head" Welch. Munky said (as transcribed by BLABBERMOUTH.NET): "We've discovered strengths that each of us has. He's very good at putting melody lines over the top of my weird chord voicings, I guess. And then I don't know how Jonathan [Davis, KORN singer] does it, but he can sing over pretty much anything we write, which is incredible because we write some weird stuff. It's probably not weird to some people, but he has the gift of singing that… he baffles Brian and I. 'Cause we're, like, 'There's no way he'll be able to write over this and it's gonna get thrown in the trash.' We write these riffs sometimes that… It's kind of hard to describe.

"Typically, I'll come up with a riff or three-quarters of a riff, and then [Head will] help me through it. And then he'll try half a dozen things as far as writing over the top of it. Or if he gets frustrated, I'll try a few things and sometimes I get lucky and come up with a type of melody thing or a sound. A lot of times I get more lucky with the weird sounds. I typically try to experiment with a few pedals and look for texture that the song sometimes gets based around a texture or a sound. Like 'Lost In The Grandeur', that scratchy, that triplet thing, the song sort of takes shape around those moments.

"But, yeah, I'll usually come up with a weird chord voicing, progression or something, and he'll kind of complement it. Or Ray [Luzier, KORN drummer] and I will pair off and come up with a groove or something, and then Brian will add in to something. Or as being an outside listener, he'll be, like, 'That's cool, but can you try it without this note or add this sort of thing to help it along?'

"It's fun — we have fun doing it," Munky added. "Even when things aren't working, we'll push forward. I always say that we just show up, which is most of it. We hang out, we have some fun and we play music. And things happen; recordings happen. It's pretty magical, I guess."

Despite the fact that he hasn't performed with his KORN bandmates for nearly a year and a half, Fieldy did play on "Requiem".