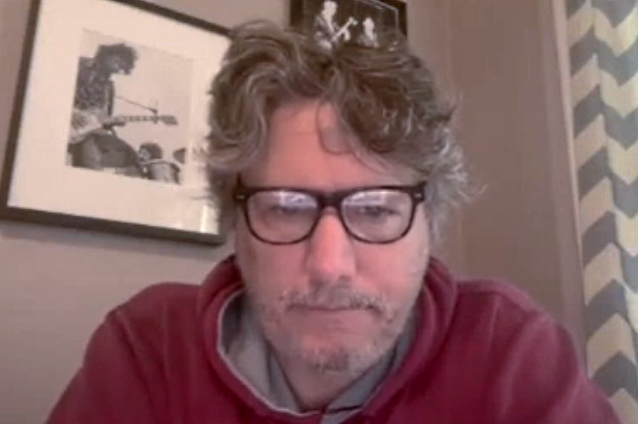 In a new interview with Shawn Ratches of Laughingmonkeymusic, former THE BLACK CROWES drummer Steve Gorman touched upon the reasons for the breakup of the band's classic lineup. He said (as transcribed by BLABBERMOUTH.NET): "It's an easy explanation. Look, you're on stage for two hours, but you're in a band for 24 hours. It takes a lot of work to keep a band who respects each other and values each other's efforts and time and a band with boundaries and healthy personal relationships, that takes a lot of work. So a band without those boundaries and a band that's each other's throats, it's an insurmountable amount of work. It was ultimately how I see it."

Gorman was also asked if he was approached by THE BLACK CROWES guitarist Rich Robinson about being involved in Rich's post-BLACK CROWES project THE MAGPIE SALUTE, which consisted mostly of ex-CROWES members, including guitarist Marc Ford and bassist Sven Pipien, and almost exclusively played BLACK CROWES songs in their live shows. "Yeah. He called and we actually got together once too," Steve confirmed. "He very much wanted me to be a part of that. And it was not something I was interested in. We were talking then at the time and very friendly, and I was happy to talk with him about it. From the jump, I said, 'Rich, I'm not interested in this.' I didn't understand… I wasn't at all interested in playing BLACK CROWES music unless it was THE BLACK CROWES, and that had come and gone. I didn't like how [singer] Chris [Robinson] ended THE BLACK CROWES, but it doesn't make sense to me to play BLACK CROWES music with someone else singing those songs."

Last month, Gorman and his former bandmates in THE BLACK CROWES tentatively agreed on terms that will clear up any financial issues between the two parties.

In his original complaint, filed in March in Los Angeles Superior Court against Chris and Rich and The Black Crowes Partnership, Gorman claimed faulty accounting resulted in him missing out on royalties from THE BLACK CROWES' albums. Gorman said he didn't know exactly how much he was owed.

Gorman, who penned 2019's memoir "Hard To Handle: The Life And Death Of The Black Crowes", is notably excluded from THE BLACK CROWES' current reunion, which recently celebrated the 30th anniversary of the band's classic debut album, 1990's "Shake Your Money Maker", with a lengthy U.S. tour. Joining Chris and Rich in the new BLACK CROWES lineup are returning bassist Pipien, who played with the band live from 1997 up until the band's hiatus in 2015, along with Brian Griffin on drums, Joel Robinow on keyboards and Isaiah Mitchell on guitar, plus backup singers Mackenzie Adams and Leslie Grant.

In August 2021, Rich told the Los Angeles Times that he had no reaction to the release of Gorman's memoir. "It didn't really affect me or make me sad," he said. "No one really takes Steve that seriously. He was our drummer for a long time, and a long time ago, he was our friend. But he was also the one who kind of schemed the most and was more willing to allow a division between me and Chris." Rich added that he remembered Gorman "telling me that the scariest thing to him and some of the people in the band was when Chris and I got along, because then they couldn't change our minds."

Rich previously addressed Steve's absence from THE BLACK CROWES' current tour in a June 2021 interview with Long Island Weekly. At the time, he said: "Steve was one of the incredibly negative and manipulative forces in the band that we really didn't want to deal with. In order to get back, we really had to do this very specific purge where we focus on the two of us and let this be something that will be positive. We can be in charge of our own triggers, but if you have other people around that have an agenda, which a lot of the older people around did, it’s just going to crash and burn. We didn't look at this as a one-time thing. We want to focus and do it right for ourselves as human beings. For ourselves as brothers. For ourselves as writing and creative partners as well as the other reasons."