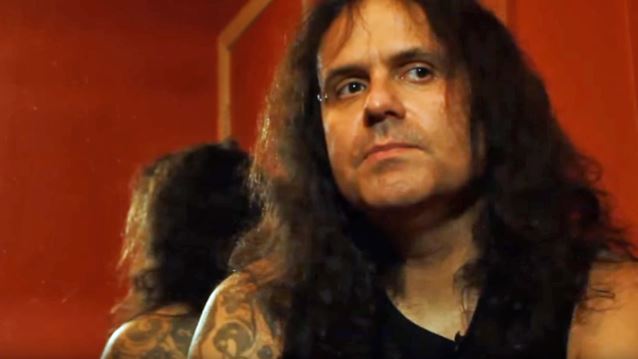 During a recent appearance on the official podcast of Canadian rocker Danko Jones, KREATOR frontman Mille Petrozza spoke about his love for early METALLICA and where he hopes to see James Hetfield and Co. go on their next studio release.

"They had one song [on 'Death Magnetic'] that got me — the one that sounded like… The ballad that turned into [a] LED ZEPPELIN [kind of thing; referring to 'The Day That Never Comes']. That was a good song."

He continued: "I didn't like the sound [of 'Death Magnetic'] too much. The guitar tone was not really crispy. I think that one guy that [producer] Rick Rubin's working with [engineer/producer Greg Fidelman], he has a bad taste for guitar tone. He has this weird, non-distorted tone that might fit to some rock acts or whatever, but not to METALLICA. It sounds like the Tube Screamer [effects pedal] is turned off, you know what I mean? [Laughs]"

Mille added: "That's one of my all-time favorite bands that I was really looking up to and was, like, 'Yeah, yeah, they're right. They sang something true in their lyrics. Look at how they put this and what they think about this and that, and nowadays I'm just not interested anymore. It's weird."

KREATOR is working on material for the follow-up to its 2012 album, "Phantom Antichrist", for a tentative 2017 release.