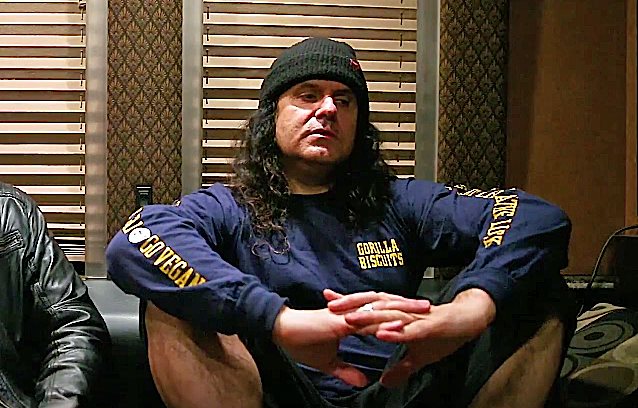 KREATOR Frontman Talks Being Vegan, Importance Of Taking Time Off Between Tours (Video)

Alex Stojanovic of Metal Master Kingdom conducted an interview with Mille Petrozza of German thrash metal veterans KREATOR on April 11 at the Opera House in Toronto, Ontario, Canada during this year's Decibel Magazine Tour with OBITUARY, MIDNIGHT and HORRENDOUS. You can now watch the chat below. A couple of excerpts follow (transcribed by BLABBERMOUTH.NET).

Mille: "To me, I don't even think about it anymore. It's just something that I… It's a choice. I know a lot of people have problems if you preach the vegan life. Like, 'Get the fuck out! I eat my steak.' I don't wanna preach, though. If anyone wants to… Do whatever you want. To me, it's a choice that I made, and I don't feel powerless. I feel very powerful, and I feel very energetic. Talking about the vegan thing, if you become a vegan, you have to make sure that you don't become one of those fast-food vegans and you eat everything only because it's vegan and you eat worse than any other person. You have to make sure that you eat your vegetables and eat fresh. Eat clean — that's the bottom line."

Mille: "Ahh… I need a break. [Laughs] There's something coming up in South America and Australia and Japan, some Asian cities. Yeah, there's a lot coming up. I'm at the point where I'm really looking forward to the six weeks off that we have. When this time is over, I will be very enthusiastic about going on tour in those cities, but at this point, I'm, like, 'Oh, fuck!' You get into this cycle. To me, this is not a job. I don't want this to feel like a job, and if you do it too much and if you do too many concerts in a row, sometimes you're, like, 'Ahhh…' And you don't wanna do that — you wanna give a hundred and fifty percent every night, you wanna keep the enthusiasm, you wanna keep the spark and the spirit, like really powerful. It's easy to get burnt out on the tours. So, yes, we need the time in between off where I don't do anything that's related to music."

KREATOR's latest album, "Gods Of Violence", was released on January 27 via Nuclear Blast Records. The cover artwork for the disc was created by renowned artist Jan Meininghaus, who also made the limited-edition artwork for KREATOR's last album, 2012's "Phantom Antichrist", and has lent his talents to bands like BOLT THROWER, ACCEPT and OVERKILL in the past. The exclusive North American cover was created by renowned artist Marcelo Vasco, who has previously worked with SLAYER, MACHINE HEAD, SOULFLY and HATEBREED.