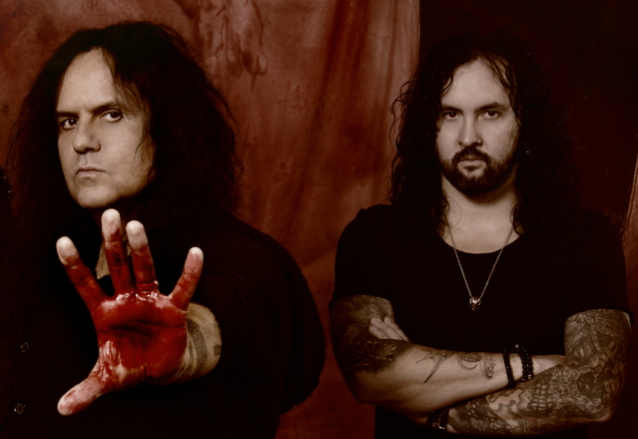 KREATOR's MILLE PETROZZA: Hiring Bassist FRÉDÉRIC LECLERCQ 'Was One Of The Best Decisions I've Ever Made'

Mille said (as transcribed by BLABBERMOUTH.NET): "Frédéric is a total pro. He's really, really focused. He's probably the best musician in the band, with Sami [Yli-Sirniö, guitar]. Those two are real classically trained musicians. He knows everything about harmonies. He's an excellent guitar player [as well]. So it was a huge help on all levels to have him in the camp and have him be a part of the band. It was one of the best decisions I've ever made, bringing him into the band, because he's also a very nice guy to be around and he's been a friend of the band for many years now. It's a lot of positive energy that he brings into the band, a lot of joy for music. He has a great sense of humor, which is essential."

Asked if Leclercq contributed to the songwriting process for KREATOR's fifteenth studio album, "Hate Über Alles", which was released in June via Nuclear Blast, Mille said: "Most songs were written, but we worked on the song 'Dying Planet' together. And also, of course, he helped me arrange some of the songs. He's a part of the team. And he also produced the demos, really. When we were in the studio doing the band rehearsals, he did the demo recordings, and they sounded great already."

Mille went on to reiterate the importance of maintaining interpersonal harmony when choosing new members for a band.

"You really have to pick the right person," he said. "A band is like a marriage with four people. And if you pick the wrong person, it can ruin the vibe in the band and it can ruin everything, really. And so I'm really happy that we found Fred. Like I said, he's been a friend and I knew that he was looking for a new challenge. There was no such thing as auditioning new bass players. I just called Fred and asked him if he wants to join, and that was it."

KREATOR and LAMB OF GOD's "State Of Unrest" European tour was originally scheduled to take place in 2020, but ended up getting postponed, first to 2021 and then to 2022, due to the ongoing coronavirus pandemic. The trek will now launch on November 18 in Copenhagen, Denmark and conclude on December 21 in Zurich, Switzerland.