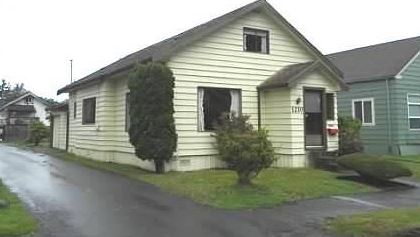 According to The Pulse Of Radio, the childhood home of late NIRVANA frontman Kurt Cobain has been on the market since 2013 for $500,000. But with no buyers since then, Cobain's mother has now dropped the price to $400,000. According to the Puget Sound Business Journal, however, this asking price is still $300,000 more than the average price for homes in the local area.

The 1,522-square-foot Cobain house is located in east Aberdeen, Washington, about 110 miles southwest of Seattle.

Despite a park named after Cobain and a statue erected last year, NIRVANA biographer Charles R. Cross doesn't think Aberdeen has done enough to honor its most famous resident. "Kurt's the most famous person that was ever born in Aberdeen and maybe the most famous person that'll ever be born, and the city has done almost nothing to honor him," he said. "The city is kind of waking up to it. Aberdeen is a city that has really struggled economically for six decades, and if they could boost their tourism just a bit, I think it would help everybody involved."

A journalist and NIRVANA fan started a GoFundMe campaign in 2014 to raise $700,000 in order to buy the house and turn it into a museum. To date the campaign has raised just a little over $2,000.

The realtor listing the property calls it a "once-in-a-lifetime opportunity to own a piece of rock history."

The home where Kurt Cobain spent his angsty youth is up for sale. http://t.co/sCOqOs1BdJpic.twitter.com/kFAdhwLFwk