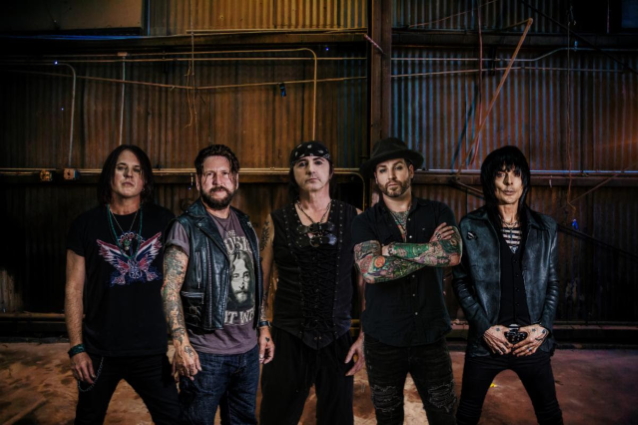 L.A. GUNS is in talks to embark on a U.S. tour with Tom Keifer and FASTER PUSSYCAT.

The news of the summer 2022 package was revealed by L.A. GUNS singer Phil Lewis in an interview with "On The Road To Rock With Clint Switzer".

While discussing L.A. GUNS' plans to hit the road in support of their upcoming album "Checkered Past", Phil said (as transcribed by BLABBERMOUTH.NET): "We made a pact, we said that we weren't gonna do any shows until the record drops. And I don't even know even if the pandemic had gone [away] if we would have changed that. It just seemed kind of our plan.

"For the last five years, we've been doing things very methodically," he explained. "In the old days, we would just throw the shit against the wall and see what sticks. We've been a lot more strategic in our planning and in our direction and what we wanna do and how we wanna do it.

"So, no, it was a very conscious decision not to do any shows until the record drops. And I'm glad we didn't because… Honestly, I think it's great that guys are back in the saddle and they're working and they're playing music and they're making people happy at their gigs, but this [pandemic] thing is not over — it is not over."

Lewis continued: "I just read today another band [ended up] going home mid-tour. Oh, BON JOVI — BON JOVI, for fuck's sake… With the logistics of it, and employing people and bands and roadies and crews and travel agents — everything, all fucked up; it's all for nothing; all completely nothing. And same thing with KISS. Paul's [Stanley] right-hand man [longtime guitar tech Francis Stueber], the guy that he's had for over 20 years. He's dead — he's not sick; he's dead; and he's not fucking coming back.

"So I just do not get why people are pushing their luck. It's one thing if Jon Bon Jovi got it — fair enough. He'd say, 'Okay, it's my stupid fault. I did something I shouldn't have done.' But what if he got someone else [sick], like his hairdresser or something? And she got sick and she died.

"I don't want that responsibility. We do not want that. I'm certainly no spring chicken. But we got our shots. Jon Bon Jovi had his shot. Nobody would dream of going on tour without getting vaccinated — well, I hope not anyway. And you're still fucked.

"So, no — no hurry at all to get back until things are right, until it's right. And the shows that we're gonna be doing when this record comes out are just local shows in the L.A. and Vegas area. And then we've got the Whisky on New Year's Eve. And that's traditional — we've [done] that at least six times. And that's a nice way to ease back into it. [We're doing] the Monsters Of Rock cruise in February. And then there's talk, and the dates are being booked, and it looks pretty solid that we'll be doing a tour with Tom Keifer. So it'll be Tom Keifer, L.A. GUNS and FASTER PUSSYCAT. I think it's a great package.

"So that's the summer plan. But who knows? This thing is not over. And until it is, nobody can really make any solid plans."

"Checkered Past" will be released on November 12 via Frontiers Music Srl.