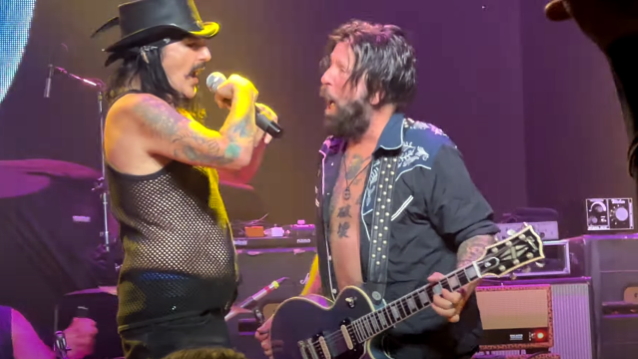 L.A. GUNS, featuring singer Phil Lewis and guitarist Tracii Guns, will release its new studio album, "Black Diamonds", on April 14. This will be the fourth studio album since the much-welcome reunion of the band's core foundation of Lewis and Guns. It will follow the well-received studio albums "The Missing Peace", "The Devil You Know" and "Checkered Past", plus the live release "Made In Milan", and a covers EP "Another Xmas In Hell".

The release date for "Black Diamonds" was revealed by Guns in a social media post on Saturday (January 21). He shared a new black-and-white photo of him and his bandmates, and he captioned it: "@laguns 2023 new album April 14 Black Diamonds and tour".

Last October, Lewis took to his personal Facebook page to share the "Black Diamonds" title and track listing, and he included the following message: "Incredibly happy to announce the completion of our forth record (post reunion). Great songs, fantastic playing and some of the best singing of my career. It's heavy and dark in places and bright n breezy in others. It's all over the place as per our usual style. I think it's the best thing we've ever done but yeah I know I say that about all of them but I truly love this record and had fun recording parts on the tour wagon and then five intense days doing vocals with Mitch [Davis] in NYC. Of course the wait for it to drop will be excruciating but I'll do my best to contain the excitement. Seriously it's fantastic and you're all gonna love it."

"Checkered Past" was released in November 2021 via Frontiers Music Srl.

Incredibly happy to announce the completion of our forth record(post reunion)
Great songs, fantastic playing and some...