A few excerpts from the Rock Sound chat follow below.

Rock Sound: How has it been working with Don Gilmore?

Andrea: It's been awesome; he's a great guy, a great producer, and we've learnt so much. We've been able to take the band to another level.

Rock Sound: Has it been at all daunting working with such a big name?

Cristina: No, not really. We're totally sure about the potential of the songs.

Andrea: Maybe in the beginning, when we didn't know him personally and our contact was through our management. We didn't know how he was going to be, if he'd have a high point of view because of all the experience he's had. When we eventually had meetings to get to know each other, we found that he's really cool and chilled out. He is very easy to work with.

Rock Sound: How has it been working with a bigger budget and extra time for this album?

Cristina: It feels great, because, of course, you have better facilities and more time to do work. Sometimes in the past we've had to record all of the vocals in not even a week, and maybe that week you're sick or you're tired or you've had interviews during the day, then you have to record. Those aren't the perfect conditions in which to work on something that is going to be around forever. It's great to have more time, and also to record in a place like California, which is really warm, so for us, as singers, that is really amazing. We haven't caught colds, everything has been relaxing — definitely the perfect conditions.

Rock Sound: What are you looking to achieve with this record? Are you happy with where the band is now, or is there room to push on?

Cristina: Well, I think that every band wants to improve and reach out to the biggest amount of people possible. With this album, we hope that more and more people will understand the message and follow it — buy the record, come to the concerts, support the band in any possible way.

Rock Sound: How will your fifth album differ from "Karmacode" and the rest of your back catalog?

Cristina: It's different, but it's still our style. We haven't done anything absolutely different from our style, because that wouldn't be natural, it would be weird — it wouldn't be us. The songs are definitely more powerful, more complete, more intense, more straight-to-the-point.

Rock Sound: The gist we have is that you're taking a more "direct" approach to songwriting on this album?

Cristina: Yeah, but "direct" in a smart and creative way. Not direct like they're just commercial songs. Somebody might misunderstand the term "direct." These songs are in your face; you'll get into the songs while listening to them.

Andrea: We've put more attention on the real meaning of the songs, so the vocals are a bit more prominent. We've worked a lot with Don on the pronounciation of the words in English, so people really understand the meanings of the words. There are strong choruses, where people can relate and really understand what we mean.

Rock Sound: We've heard the theme of the record relates back to celebrity culture.

Cristina: We just gave the example of celebrities, because you can open up a paper and find that gossip about Paris Hilton is in the first few pages, whereas the much more important news is at the back. People are more interested in superficial stuff, giving more importance to those things.

Rock Sound: So it's not about the fame game/celebrity specifically?

Andrea: It's more against the superficial lifestyle in general, but not regarding celebrities. You can talk about celebrities, but you can also talk about everyday people. It's more a reflection on life itself, and especially on the way you lead your life in a superficial way.

Cristina: …when you forget real things, you give too much importance to other stuff that's there for a second and then disappears. It's pretty silly.

For more information on the Christmas 2008 issue of Rock Sound magazine, visit www.rock-sound.net. 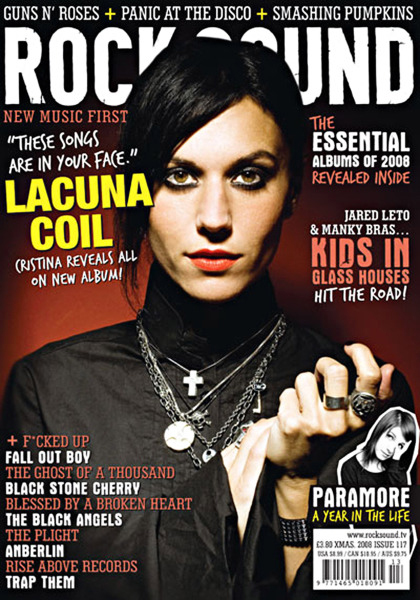