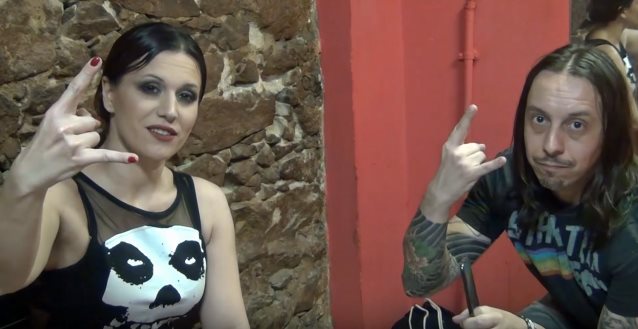 LACUNA COIL singers Cristina Scabbia and Andrea Ferro have revealed to the Brazilian metal channel Heavy Talk that they are planning "something special" to celebrate the twentieth anniversary of the release of their self-titled debut EP.

Asked if LACUNA COIL will release another DVD to follow 2008's "Visual Karma (Body, Mind And Soul)", Cristina said (see video below): "We have plans. We don't know if it's gonna be a DVD or something, but we are planning something special for the twentieth anniversary of the band that will be coming late next year. So it will be something different — not just a typical [release]."

Added Andrea: "We have kind of a secret project. We can't really tell right now, but it involves different things. It might also be a DVD, but it's a more complete package we're gonna offer to celebrate the twentieth anniversary. So there is something in the works, but not specifically just a DVD."

LACUNA COIL last fall wrapped up a successful European tour, which was sold out in various cities, including London, Birmingham, Bristol, Southampton and Tilburg. The band is set to do another run of dates later this year.

LACUNA COIL's latest album, "Delirium", entered The Billboard 200 chart at position No. 33 with first-week sales of just over 13,000 units — nearly all from pure album sales. The set followed the No. 27-peaking "Broken Crown Halo", which also opened with around 13,000 copies back in 2014.