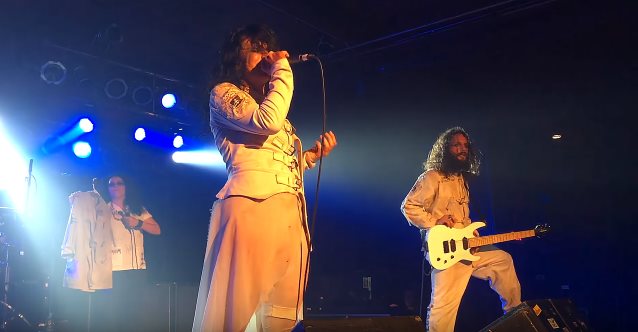 Australia's Sticks For Stones recently conducted an interview with vocalist Andrea Ferro of Italian heavy rockers LACUNA COIL. You can now listen to chat in the YouTube clip below.

Speaking about how LACUNA COIL's live show has evolved over the years, Ferro said: "I would say, obviously, we're more experienced, but also we do have a new lineup, because we've been changing a few bandmembers; they've been retiring from the band. And so we now have Ryan Folden as a drummer, [who] has also recorded [his] first record with us, the last one, 'Delirium'. And then we have a new guitar player called Diego [Cavallotti], [who] is from Italy, whom we're trying on this album cycle. He recorded a couple of lead guitars on the record, and now he's doing this debut live. I mean, he's been touring with us since a few months now; he's done Asia and North America, and now he's playing with us in Europe. So, basically, we're gonna try him for the whole cycle of the record before we decide if it's gonna be a permanent member. But so far so good, and it's a very good candidate, and we like him. And if everything works as right now, he will be our permanent guitar player."