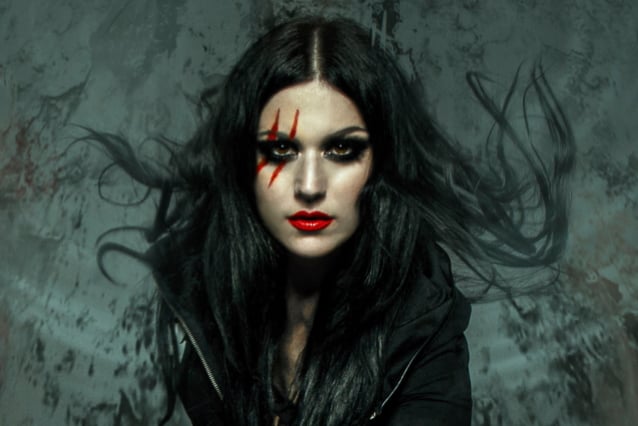 LACUNA COIL singer Cristina Scabbia spoke to Spain's Metalovisión about the increase in the number of female musicians in the heavy metal genre in recent years. She said: "When I started with LACUNA COIL, [which] was more than 20 years ago, there were very, very few bands with a female in the lineup. And now you see them everywhere, and that makes me really happy. At the same time, I don't want to put too much pressure or stress over the 'female' thing, because, to me, it's such a normal thing that we shouldn't even be talking about it. I mean, there are girls that can play and sing, as there are guys that can play and sing. And, of course, there will always be a majority of guys in metal bands, because of the kind of music of the genre. But I think music is for everyone, and metal is for everyone, so I'm happy about the female members phenomenon. But I don't talk too much [about it and] I don't see myself as, 'Wow! There's a female in the band.' I am a singer in the band with my friends."

Almost four years ago, Scabbia said that she wasn't opposed to performing at festivals featuring only bands with female singers. "There is a big part of fans that are enjoying this type of music, and it's cool that you can actually offer a festival with bands that are playing that style," she explained to Lisa-Marie Cantus. "I'm not very happy about the 'female-fronted' term, just because, for me, it's very natural to think about a female in a band as a person like any other in the band. So I don't do the separation in between guys and girls. It's just, like, you can be a singer, you can be a guitar player, drummer… but I don't do the separation of the sex in the band. But I'm glad that there is a chance to have a festival like that where the crowd can just go and know that they're gonna find this type of music and female voices performing."

Scabbia also talked in more detail about her views on females in the heavy metal genre. She said: "I think that whoever says… I said it too, and I say it, that we need more girls in the scene. But it's not because I am only supporting the female-fronted bands. It's more because music is for everyone, so... Metal, it's pretty much the only genre — because I cannot think of any other else — that is still a little bit conservative when it comes to talk about a female in the band. It's still, like, 'Oh, it's metal. It's weird to have a female in the band.' And, to me, it's really weird."

The deluxe edition of "Black Anima" comes with a limited-edition custom deck, created with the help of artist Micah Ulrich.

The band recently completed the "Disease Of The Anima" North American tour with ALL THAT REMAINS.