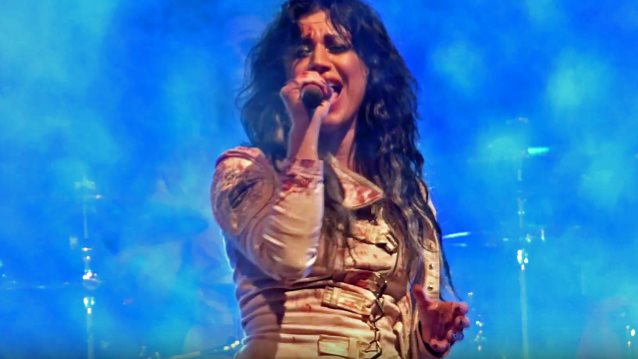 LACUNA COIL's CRISTINA SCABBIA: 'People Are Scared By Mental Illness Because They Don't Know Much About It'

Alex Haber of Heavy New York recently conducted an interview with frontwoman Cristina Scabbia of Italian heavy rockers LACUNA COIL. You can listen to the entire chat below. A few excerpts follow (transcribed by BLABBERMOUTH.NET).

Cristina: "So far so good. Now it's been more than a year and it really showed me that in a career of a musician, everything can change and evolve and so many things can happen between records and during the cycles, which is crazy. 'Delirium' was accepted by old-school fans; we got a lot of new fans approaching us and loving the band and following us around. I don't know…there was like a new level of energy around the band. Not only to the thematic songs of the record that were very intense, but the change of the lineup that brought so much more to the vibe in the band. I can only say positive things about this record. It brought so much emotionally, musically and for so many reasons."

On whether she hopes the band's lyrical topics exploring mental health connect with fans:

Cristina: "Importantly, I had a lot of experience that connected to mental health. There is a member of my own family who is severely damaged mentally, so I know a lot about centers of cure, doctors and neurologists and medical stuff like this, importantly. It's not that I like to be a sort of 'expert' in this, but I also know that it's a part of life. A lot of people are affected by it. When you say 'mental illness,' there's such a huge field to consider because it's not only depression as you might say, but it's also dementia, it's also Alzheimer, it's also problems connected to cancer, to radiotherapy, chemotherapy. It's such a big, big, big, big picture. Importantly, for us, the inspiration was coming from real life. We talked about it as an approach to reality. We didn't really want to teach something to anyone. It's our way to release some of the negative pressure coming to us. I think it was important to treat this [topic] with huge respect because sometimes we are scared about mental illness because we don't know much about it. Too many times we judge people based upon what we would do, but that's not how we work. It's hard to relate to someone with mental illness if you're not [ill]. It was inspired by that, but we didn't want to be, 'Okay, let's be cool. Let's talk about mental illnesses because it's scary.' We've been into [it] and I personally still am. Obviously, what happened in the last months [referring to the suicides of SOUNDGARDEN frontman Chris Cornell and LINKIN PARK vocalist Chester Bennington], it's crazy. It's crazy. It happens every day, but of course it affects you even more if it happens to people that you expect to be super-happy and super-famous, super-rich. You think they have it all, but they realized that it's not enough."

On why LACUNA COIL felt it was the right time to address mental health issues on "Delirium":

Cristina: "We chose to talk about this because it's been a few years now that we've been experiencing this, especially me. In the other records, the inspiration was coming from something different just because in that particular time of our life, we were experiencing this. There are so many things that can influence a record that you might have no idea. It's not just songwriting, but it can be a place where you record, it can be the producer you're working with, if you're recording in a place that's warm and sunny and by a seaside, you might have a more, let's say, 'positive' influence to do the record. Sometimes you record in a cold place and a gray place and it sounds a little darker. There are so many things that are influencing the sound of our records. But what's important for us is to not be afraid to experiment and to do something different, whether our fans like it or not. At the end of the day, it's us who have to play the songs live, so we have to like them because it would be unfair to write something that we know people will like and expect from us."

On whether LACUNA COIL's fall North American trek with EPICA and INSOMNIUM was designed as a "dream tour":

Cristina: "Not really. We've been friends with Simone [Simons, EPICA vocalist]. That's how it happened. Let's face it: packages are working much better than shows with a single artist playing. Everybody now works like that because there is so much competition from different tours with other bands playing at the same time. Now, you don't sell that many records, so every band is basically on tour. What you try to do is put together a strong package you might want to like. And what's better than going on tour with friends and people you already know? Even if they play a different kind of music, even if we're both European bands, our styles are completely different, musically and our imagery is completely different. I think it's going to be interesting for whoever comes to the shows because they will see a variety of different bands. INSOMNIUM is going to be there and I can't wait to see them because I've so heard many good things and I've heard some of their songs and they sound amazing. It's going to be a good package and it's going to be fun for whoever is going to come to the shows. People will be able to taste something different with every band."

LACUNA COIL's month-long September tour with EPICA marks the Italian band's first U.S. tour dates in over a year, as they continue to support "Delirium". Joining LACUNA COIL and EPICA on "The Ultimate Principle" tour are INSOMNIUM and ELANTRIS.