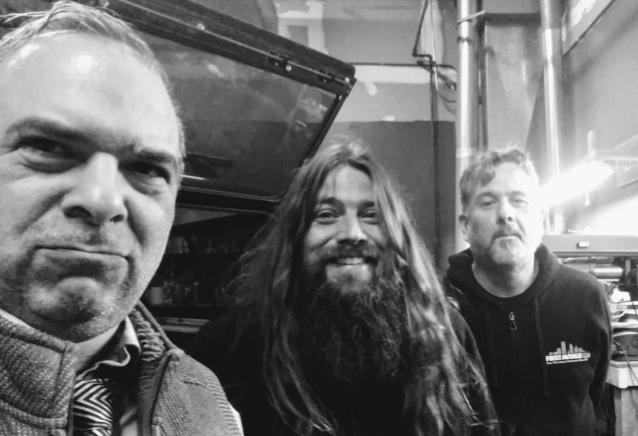 MORTON GASTER PAPADOPOULOS, the band featuring Yanni Papadopoulos of STINKING LIZAVETA, Jean-Paul Gaster of CLUTCH and Mark Morton of LAMB OF GOD, has released a new single called "The Burnt Offerings". The trio is joined on the song by Naeemah Maddox on vocals and Chris Brooks on keyboards.

Maddox stated about "The Burnt Offerings": "In the current social climate, it is no longer sufficient to be non-racist. One must be anti-racist. This moment demands true accountability, and real change.

"Transnational corporations stating their support for BLM should only be taken as sincere if they also advocate and lobby for social reforms like a living wage, universal healthcare, and defunding and demilitarizing the police; using these new freed up resources to reinvest in vulnerable communities that need it most.

"The time has long passed for petty sloganeering and cynical tokenism. Being against police brutality in 2020 shouldn’t even be a political issue. This is a failure of our society and goes beyond political persuasion. This is about human rights and creating a world our children would want to live in."

Papadopoulos added: "These were my riffs that I brought to the table when jamming with Mark and JP. Those guys took the parts and rearranged them in a less linear order and Mark added his own fills in the spaces. Of course, Naeemah wrote her own parts to the arrangement with lyrics, vox and flute. Chris Brooks filled in the keys. However, it all started with a bassline which I thought JP could really sink his teeth into. J. Robbins was great to work with, he knew just how to make sense of it all. What you're hearing is virtually a live-in-the-studio track. Mark's solo was cut live with bass and drums with no edits. First-take magic!"