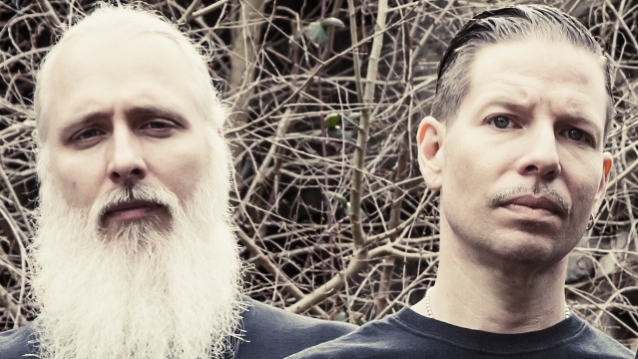 Two guitars belonging to LAMB OF GOD were allegedly stolen Thursday morning (May 2) before the band's concert at Ak-Chin Pavilion in Phoenix, Arizona.

According to LAMB OF GOD guitarist Willie Adler, his "main beloved Warbird," along with bassist John Campbell's "one-of-a-kind handpainted bass" went missing after the musicians had left the area and the culprits "made their way into the back of our semi to commit this felony."

Adler posted several photos of both instruments on his Instagram (see below) and appealed to everyone in the Phoenix area to be on the lookout for the guitars.

LAMB OF GOD's current North American tour with SLAYER kicked off in Phoenix and will culminate at the Xfinity Center in Mansfield, Massachusetts on May 25. LAMB OF GOD is also scheduled to perform at Domination Mexico festival in Mexico City on May 4 and Sonic Temple festival, taking place at MAPFRE Stadium in Columbus, Ohio on May 18. The band will begin a run of European festivals and headline dates on June 13.

LAMB OF GOD guitarist Mark Morton recently confirmed to Metal Insider that he and his bandmates have been working on new material for their upcoming studio album.

LAMB OF GOD has just commemorated the 15th anniversary of its classic LP "Ashes Of The Wake" by re-releasing the effort on double vinyl with four non-LP tracks, including the b-side "Another Nail For Your Coffin" and three previously unreleased demos. Each double vinyl includes a download card, and is manufactured on limited Green Smoke vinyl for the LAMB OF GOD store only. Additional retailers are carrying standard black vinyl. A digital version is also available on all DSPs.

ATTENTION ALL...and particularly in the Phoenix area. My main beloved Warbird, along with @jayceerva one of kind hand painted bass; were stolen early Thursday morning from @akchin.pavilion in Phoenix. The pieces of shit that did this are suspected to be employed by @akchin.pavilion. local hands that were working Wednesday, our tour production day. Apparently, they waited around for all to leave, and made their way into the back of our semi to commit this felony. AGAIN..under the watch of @akchin.pavilion and their security. Karma is a fuckin bitch...