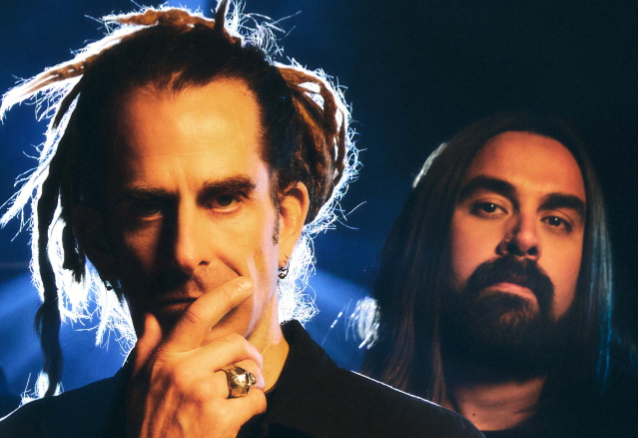 LAMB OF GOD drummer Art Cruz joined Joshua Toomey and the "Talk Toomey" podcast this week to discuss all things LAMB OF GOD and the band's upcoming album, "Omens". In the video clip below, Art talks about the fill-in musicians that helped out LAMB OF GOD on their recent tours, and the "greatness" of LAMB OF GOD frontman Randy Blythe.

"I'm speaking as a fan as well," Art said (as transcribed by BLABBERMOUTH.NET). "Randy Blythe, he's the greatest frontman in heavy metal history, in my opinion — not just on a vocal level; it's more of a performer, you know what I'm saying? Metal bands need a performer and somebody like that that can really take it and lead you through this adventure. So I think between Randy and people like Jamey Jasta [HATEBREED] and obviously Phil Anselmo [PANTERA], these are elite frontmen, in my opinion. That's just in my generation too. You can go back even more and start going deep into the older stuff, the classic metal days and stuff like that. There's a lot more performers happening now, I think. From the hardcore scene and that New Wave Of American Metal that came through, your frontman was kind of everything."

Blythe spoke about what he believes makes a good frontman during a recent appearance on a recent episode of "Stoke The Fire", the alternative lifestyle and culture podcast hosted by musician Jesse Leach (KILLSWITCH ENGAGE) and DJ/presenter Matt Stocks ("Life In The Stocks"). "There are guys in their closet with their YouTube rig or in their garage who can outsing either fucking one of us," Randy said, addressing Leach. "There is no doubt about it, man. They have more talent, natural talent, in their little pinky than either of us. But the difference is… I think one of the main requirements to be a frontman, a good frontman — actually, the only requirement, probably; I mean, you've gotta have some talent — is a willingness to get up in front of people and make an idiot out of yourself and be really bad for a while until you become good. And so these people with all this natural talent, it doesn't fucking matter unless you can get in front of people and do it, and you have to do it with a group of people; you have to feel that bond; you have to deliver."

"Omens" is due out October 7 on Epic. LAMB OF GOD tracked the effort with longtime collaborator Josh Wilbur (KORN, MEGADETH) live in the room together at Henson Recording Studios (formerly A&M Studios) in Los Angeles, California, a location that birthed classics from THE DOORS, PINK FLOYD, RAMONES and SOUNDGARDEN, among others.

"Omens" is the follow-up to LAMB OF GOD's self-titled album, which was released in June 2020 via Epic Records in the U.S. and Nuclear Blast Records in Europe. That LP marked LAMB OF GOD's first recordings with Cruz, who joined the band in July 2019 as the replacement for the group's founding drummer, Chris Adler.