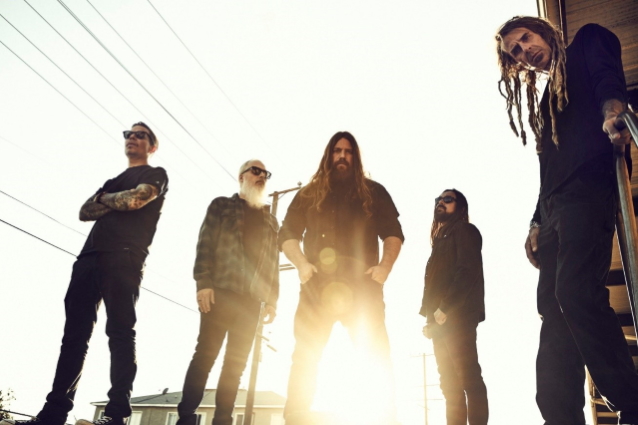 LAMB OF GOD's JOHN CAMPBELL: 'It's Been Amazing To Have ART CRUZ Come Into The Band'

In a new interview with Terry "Beez" Bezer of Knotfest.com's "Mosh Talks With Beez", LAMB OF GOD bassist John Campbell spoke about Art Cruz, who joined the band last year as the replacement for the group's founding drummer, Chris Adler.

"It's been amazing to have Art come into the band," John said (see video below). "He's enthusiastic, he's energized and motivated, and it kind of freshens things up for everybody, I think. A lot of times, these experiences that he's having with us is the first time he's done some of these things, and for us, it's, like, 'Oh, yeah, I guess it is pretty cool. We should be maybe a little more appreciative of these little things. But as far as the playing, it's been amazing. He's got a great feel. He's been playing drums, listening to LAMB OF GOD as a main inspiration for many years, so he's got the basics down, but he is his own unique player, and he's got nice little tasty fills and tricks, and it's a pleasure playing with him."

Cruz made his recorded debut with LAMB OF GOD on the band's self-titled album, which came out in June via Epic Records in the U.S. and Nuclear Blast Records in Europe.

Art filled in for Chris on several LAMB OF GOD tours in the past couple of years before being named Adler's official replacement in July 2019.

Later this month, LAMB OF GOD will offer fans first-time-ever live performances of "Lamb Of God" and the landmark 2004 album "Ashes Of The Wake", both performed live in their entirety in the band's hometown of Richmond, Virginia. As standalone ticketed events, these performances will be LAMB OF GOD's only chance to perform these songs for fans this year — and the band are ready to deliver to the highest degree.