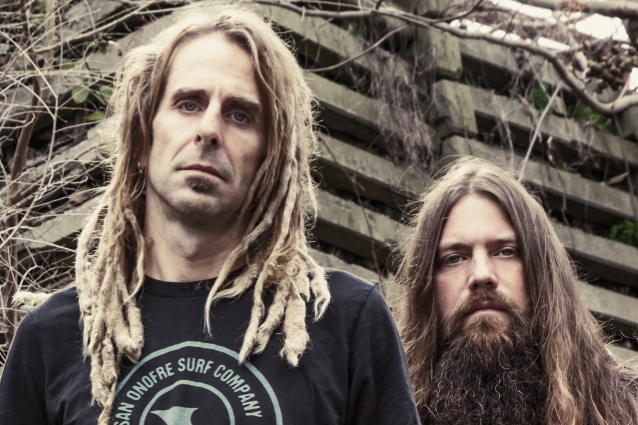 Alex Haber of Heavy New York recently conducted an interview with LAMB OF GOD guitarist Mark Morton. You can listen to the entire chat below. A few excerpts follow (transcribed by BLABBERMOUTH.NET).

On the writing process for his new solo EP, "Ether":

Mark: "I really didn't necessarily anticipate releasing another project so quickly after [debut full-length solo album] 'Anesthetic', but I had played some shows, some acoustic shows in support of 'Anesthetic', and I kind of got the idea from playing shows that were really well received that it was cool to sort of interpret those songs into a more mellow vibe. I started messing around with some new stuff and I came up with some tunes and had the opportunity to record them and get a timeframe for a release, and that's where 'Ether' came from."

On whether he took a different songwriting approach on "Ether" compared to "Anesthetic":

Mark: "I don't think necessarily, in terms of the way I write songs, [that] it was that different. It was different because it was primarily acoustic, but I've always played acoustic guitar, so that wasn't a stretch for me and I wrote the songs in the same process. What was primarily different was the timeframe. 'Anesthetic' was written and recorded over the course of, really, a number of years. Even from the time I started first being in the studio until it was released was two, two and a half years. I had been writing for I don't know how long before that compiling material. Everything on 'Ether' — obviously not the covers, but all the originals — are new material written specifically for the project. That all came together in a matter of really two or three months. So, by contrast, 'Anesthetic' had a really, really long gestation period. 'Ether' was really quick — almost spontaneous."

On whether he will bring any of the experimental ideas found on his solo albums into LAMB OF GOD or plans on keeping the two separate:

Mark: "Honestly, it's probably the opposite, because there have been times in the past… This isn't like some new way for me to be writing rock songs and acoustic songs and blues music; I've been doing that all along. I'm just more known for the metal stuff because, obviously, I'm in LAMB OF GOD, which is a big-profile band. I've been always doing this kind of stuff at home or in the background. I've done some writing for other artists behind the scenes. That's always been happening. It's not like a new endeavor for me in terms of the creative process. What's new about it is it's being released and recorded. With regard in how it fits with LAMB, I think there's times in the past when writing songs for LAMB, where I've maybe been a little overambitious in terms of trying to put that rock vibe or that bluesy style or the little too melodic parts to try and sort of force that into the context for LAMB. Sometimes it's worked and it's been good for a push and been a catalyst to get out of our comfort zone. But there are times as a songwriter that I've been frustrated because I have an idea and I can't quite make it fit, it doesn't work or it doesn't turn out how I envisioned it with LAMB. I think having this solo stuff, having the opportunity to have a landing pad for those kinds of ideas, have a destination for the more rock kind of stuff, really cleans the slate for me and allows me to have more clarity and focus when I do engage with LAMB OF GOD and I start writing for that band."

On whether he has more "creative independence" in his solo output versus LAMB OF GOD:

Mark: "LAMB OF GOD is very much a democracy. We all have to sign off on everything to sort of make it real and make it 'done.' I am a big part of the songwriting in that band, but I am one of the guys in the band and we're all kind of a team effort. I think with the solo stuff, I still have a team around me. I work very closely with Josh Wilbur, my producer. We co-write. We kind of have a vision for the project together. I work collaboratively with a lot of the singers, not all the time. Sometimes I'll write the lyrics and the whole song and music, but a lot of times lyrically, particularly, I'll be collaborating with other artists, Howard Jones [LIGHT THE TORCH, ex-KILLSWITCH ENGAGE], John Carbone [MOON TOOTH], we co-wrote on the song on the 'Ether' EP that he sings on. It's very collaborative, but I sort of get to direct things creatively in terms maybe a little more than I do in LAMB, where it's a more of a democracy and I'm just pitching ideas and contributing a lot, but not necessarily always directing the flow of where everything is going."

On LAMB OF GOD's appearance at the 2019 Sonic Temple Art + Music Festival in Columbus, Ohio:

Mark: "That particular Sonic Temple Festival, it was in a stadium, and [LAMB OF GOD singer] Randy Blythe, who I think is the best frontman in heavy metal, made that stadium into a theater that day. I remember telling him when we walked off stage, 'Randy, you're the best in the world.' Because he took tens of dozens of thousands of people who were there, and he shrunk that whole stadium into the size of a 2,500-seat theater. That's why he's the best in the world at what he does. I will give him love all day long. He's one of my best friends and I think he's the best frontman in heavy metal. Sometimes when you have a star like that and they're 100 percent on point and the audience is willing, you can actually make that connection even in a monster arena like that."

As with Morton's solo debut, "Anesthetic", released last year, the guitarist enlisted the talents of various musicians and vocalists to bring his songs to life. "Ether" features appearances by Lzzy Hale (HALESTORM),Howard Jones, Carbone and Mark Morales (SONS OF TEXAS). The EP is made up of three original songs and two covers that once again showcase Morton's diversity as a musician.