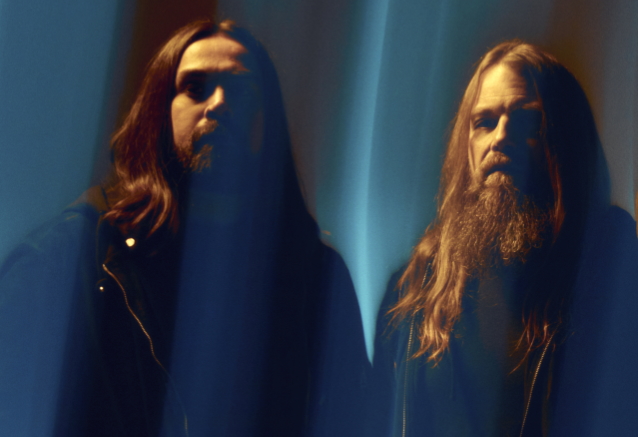 In a new interview with Finland's Chaoszine, LAMB OF GOD guitarist Mark Morton was asked if the band's drummer of the past four years, Art Cruz, was more involved in the songwriting process on LAMB OF GOD's upcoming album, "Omens", than he was on 2020's self-titled effort. He responded (as transcribed by BLABBERMOUTH.NET): "I think so. Yeah, I'd say so. Not that he wasn't involved in the first one — he was very involved in the first one — but I think his confidence was up. And I think psychologically, everyone, especially him, was ready to have a bigger impact sonically on the record and to have more personality in the drums rather than… I think on the last album, the self-titled album, he played phenomenally but he stuck very close to traditional LAMB OF GOD movements, and on this album he stretched out quite a bit."

Morton continued: "I think it's about finding a balance about staying true to the historic sound of the band and how the band has sounded; you don't wanna come in sounding radically different. But I think we're all ready, and have been ready, to allow him to grow within the context of LAMB OF GOD, and he's done that for sure."

Cruz filled in for original LAMB OF GOD drummer Chris Adler on several of the band's tours before being named Adler's official replacement in July 2019.

Art spoke about his contributions to "Omens" — which will arrive on October 7 via Epic Records — during an appearance in June on "The Garza Podcast", hosted by SUICIDE SILENCE guitarist Chris Garza. "The first, self-titled one we did, it was great, man — we wrote some great songs," he said, referring to 2020's "Lamb Of God", which marked his recording debut with LAMB OF GOD. "But I was still learning their vibe. I was green to that level of… Those guys had been doing it for 28, 29 years — almost 30 years — and I'm the new guy, a young kid coming in. You have to go through the trenches in every which way. And that first album was a very secure, safe way for all of us to just, 'Here's the tunes. Let's figure it out. Learn how we work.' And this one that's coming out, 'Omens', they really let me spread my wings and they really let me play me — they let me be me.

"I'm always inspired by LAMB, and LAMB is a signature sound," he continued. "LAMB OF GOD, to me, is that sound as a unit. It's a unit — it's not one individual. It's Randy [Blythe, vocals], it's Mark [Morton, guitar], it's Willie [Adler, guitar], it's John [Campbell, bass], it's Chris. That's, to me, what LAMB OF GOD was. So I'm not far off from that. That's what inspired me to be listening to metal and shit. It's my favorite metal band of all time. So to take that inspiration and then become my own person, my own player, from WINDS OF PLAGUE to AZUSA to my first band ENTHRAL to PRONG, to finally come to this point, and this is the album. It's all of those bands, it's all of those struggles, all of those trenches, all of those challenges, all of those tours — this is the album that I was able to really… And then the last LAMB OF GOD album, that is what built me to be to this 'Omens' album, for real. And we're just getting started, man — we're so just getting started. And I'm ready. And I'm mentally in a better place to do that, and I'm ready to do it. And the band is, they're my brothers."