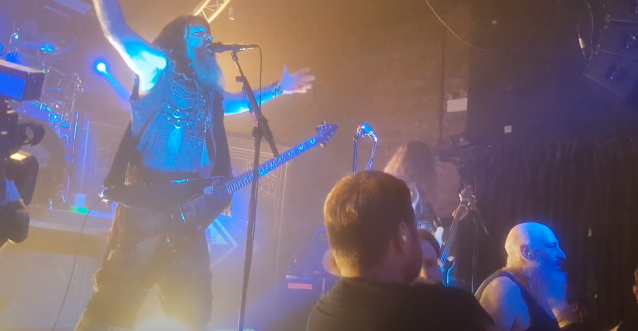 The band kicked off the evening with a cover of METALLICA's "Creeping Death" and ran through a 16-song set that included three tracks from their just-released tenth studio album, "Of Kingdom And Crown": "Become The Firestorm", "Rotten" and "Choke On The Ashes Of Your Hate".

MACHINE HEAD's setlist was as follows, according to Setlist.fm:

"Of Kingdom And Crown" was released on August 26 via Nuclear Blast/Imperium Recordings. The follow-up to 2018's "Catharsis", "Of Kingdom And Crown" includes the three songs that were featured on last year's "Arrows In Words From The Sky" single: "Become The Firestorm", "Rotten" and "Arrows In Words From The Sky". Much of the new MACHINE HEAD album was recorded at Sharkbite Studios in Oakland, California with engineer/producer Zack Ohren.

Some pics of the gig and mayhem and haos ensures when John Gouck Floyd Barber and Phil Atkins hit the Glasgow cathouse.

Some merch from last night