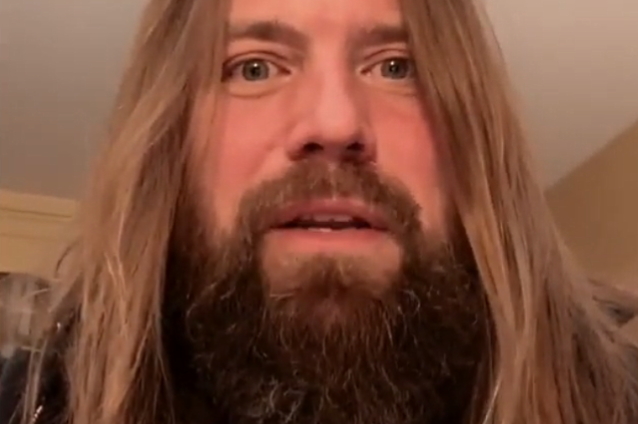 In a recent Cameo video message requested by Jonathan Montenegro of Sobre La Dosis, LAMB OF GOD guitarist Mark Morton was asked to name his biggest accomplishment and his biggest failure. He responded (as transcribed by BLABBERMOUTH.NET): "I think my biggest accomplishment are my two daughters. I have a very young daughter — she's brand new; less than a year old — and then I have an 11-year-old daughter. And she's just a wonderful kid, man. She's a beautiful human being and I'm so proud of her and the person that she is. And to know that I get the honor of raising her and being her father I consider to be my greatest accomplishment, along with my youngest, who's just barely crawling now. So I get the chance to do that all over again. Beyond my children, I think my biggest accomplishment is my sobriety. I've been sober for several years, and that's a big accomplishment for me, because I was really, really consumed with addiction — alcoholism and addiction — and it was ruining my life and it was ruining me and my relationship with people that love me and that I love back. So it was a very, very difficult process to get there, but I'm grateful that I had had the chance to live life in recovery. So that's a big accomplishment for me as well."

As for his biggest failure, Morton said: "I tell you, man, I'm in a place in my life where I'm so really blessed and grateful for the way my life is that I don't necessarily consider anything a failure because it got me to this place. Some of it was difficult and challenging, but it got me here. And here's a good place for me. So I don't know that anything was a failure. I would say what I failed to do was go a little easy on myself. I've always been really hard on myself most of my life and I think that's maybe the motivation for some of my success, but it's also been difficult to live with myself at times. So I would say maybe I could have done that a little bit different."

The 2022 leg of LAMB OF GOD's "The Metal Tour Of The Year" with MEGADETH will kick off on Saturday, April 9 in Las Vegas, Nevada and hit a further 21 cities before wrapping in Allentown, Pennsylvania on Sunday, May 15.

LAMB OF GOD recently entered a California studio with longtime producer Josh Wilbur (KORN, MEGADETH, GOJIRA, TRIVIUM) to record some of its brand music, tentatively due later in the year.

LAMB OF GOD's upcoming effort will be the follow-up to the band's self-titled album, which was released in June 2020 via Epic Records in the U.S. and Nuclear Blast Records in Europe. That LP marked LAMB OF GOD's first recordings with Art Cruz, who joined the band in July 2019 as the replacement for the group's founding drummer, Chris Adler.