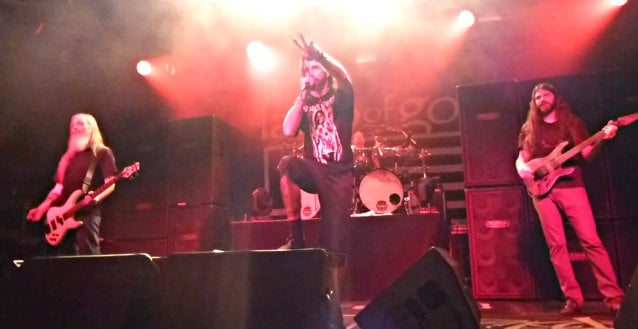 LAMB OF GOD's MORTON Sitting Out European Tour; BETWEEN THE BURIED AND ME's WAGGONER Filling In

Guitarist Mark Morton of Richmond, Virginia metallers LAMB OF GOD is sitting out at least the first few shows of the band's current European headlining tour due to a "family emergency." Filling in for him is Paul Waggoner of BETWEEN THE BURIED AND ME.

Fan-filmed video footage of the first show of the European tour, which took place last night (Monday, January 6) in Vienna, Austria, can be seen below.

Prior to performing the song "Walk With Me In Hell" at the Vienna concert, LAMB OF GOD frontman Randy Blythe explained Morton's absence, telling the crowd, "You may have noticed Mr. Mark Morton is not here with us tonight. He had a family emergency, so he had to stay home. It's family first for this band. We apologize, but he had to be with his family. Luckly, we have a very big music family, so we've got our friend Paul Waggoner from BETWEEN THE BURIED IN ME [playing with us tonight]."

LAMB OF GOD recently entered into a worldwide distribution deal with Specticast (LED ZEPPELIN's "Celebration Day", Paul McCartney's "Rock Show") for their Don Argott-directed ("Last Days Here", "Art Of The Steal", "School Of Rock") feature film "As The Palaces Burn". Filming for the movie began in 2012 and concluded in March of 2013.