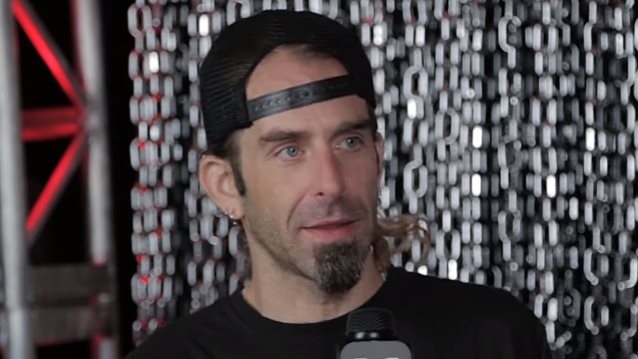 Zeena Koda of VEVO conducted an interview with LAMB OF GOD singer Randy Blythe at this year's Rock On The Range festival, which was held May 20-22 in Columbus, Ohio. You can now watch the chat below.

Speaking about the process of writing his memoir, "Dark Days: A Memoir", which came out last year, Randy joked: "Writing is easy. All you have to do is stare at a blank page until your eyeballs bleed."

He continued: "I wrote kind of slowly. By the time I sent in my third draft, there wasn't any revision; it was just amputation. That's what my editor told me. Which is like ripping your soul out. You don't want to [go through it], but, I mean, that's why you need an editor; otherwise you get indulgent. But it's, like, a whole chapter will disappear, and you're, like, 'There's a month of my life.' Literally. There's a whole month. Boom! I remember writing all that stuff. Gone."

Blythe also talked about the major differences between telling his own story and writing fiction. He said: "I'm pretty wide open as a person in general, so what you see is what you get, whether it's on stage or in a book, or if I write with my photographs. I don't know… Some people think I'm too blunt. I've had to temper that a little bit.

"For me, writing that book, in some ways I think it was a lot easier than writing a fiction book, because I knew what was gonna happen; I lived it. On the other hand, it was a lot harder, because it's not a happy book, and the main character, that being me, if I didn't like something that was happening to him, I couldn't just say, 'Okay, suddenly he's developed the ability to fly and [he took himself] out of the situation.'"

He added: "I learned a lot about the discipline that it takes to write, 'cause that's what it is for me. Writing itself — like sitting and the words coming and all that stuff — I mean, yeah, you work on it, but it's not hard for me. The hard thing to do is to sit down in a chair every single day, like I said, and stare at blank page or a computer screen and just, like, 'Urgh.' It's not inspiration; it's discipline. That's exactly what it is.

"I can't remember who said it. It was, like, 'They say, 'I only write when I'm inspired.' Luckily, I'm inspired at precisely 9:30 a.m. every single morning.' That's what it is. Sit down and put your butt in the chair. That's the hardest thing."

In "Dark Days", Blythe tells the whole incredible story of his arrest, incarceration, trial, and acquittal for manslaughter in the Czech Republic over the tragic and accidental death of a concertgoer.