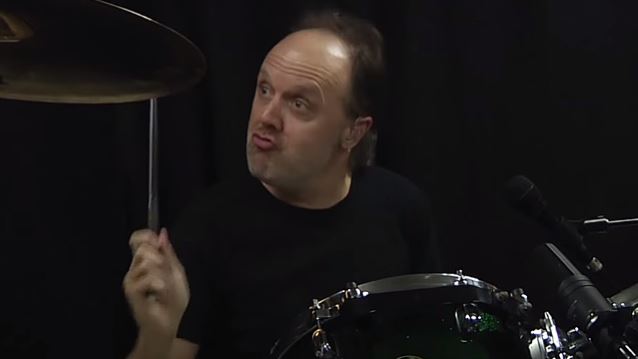 In a brand new interview with FOZZY singer Chris Jericho for the "Talk Is Jericho" podcast, METALLICA drummer Lars Ulrich spoke about how he became the foundation for the band's groove emporium after losing interest in technical prowess and focusing more on improving his skill at keeping steady time. "That's kind of been my M.O. for most of METALLICA's career," said Ulrich, who has gotten a lot of flak over the years from people who accused him of being a poor drummer. However, Lars admitted that he wasn't always impressed by drummers who kept a steady tempo but showed no flash.

"Things started so quickly [for METALLICA], and literally, half an hour after we started, we were in San Francisco, and then Jonny Z [METALLICA's early manager and Megaforce record company owner] called me and we were on the East Coast, and then we were making a record," he recalled. "I mean, it just moved so quickly. And when we came back from 'Ride The Lightning', it was, like, 'Wow!' And we had a little bit of time [off]. At that time, a month or two was like an eternity. It was, like, 'What am I gonna do now for a whole month?' And so Kirk [Hammett, METALLICA guitarist] went back to taking guitar lessons from [Joe] Satriani. And I went back and I thought I could… I'd never really taken lessons. I just wanted to be in DIAMOND HEAD and MOTÖRHEAD. It was, like, 'Oh, you have to learn to play the instruments?' I mean, it was almost like karaoke in the beginning. I just wanted to be in a karaoke heavy metal band. That's what [James] Hetfield [METALLICA frontman] and I did — we just sat and played along to DIAMOND HEAD. Then, all of a sudden, it was, like, 'Wow! This is getting real.' It wasn't really intended that way. And so I'd never really taken lessons. So I tool some lessons from one of Satriani's guys, a super-cool guy. And Kirk took lessons, and we were playing a little bit of catch-up. And so I went through a period that probably culminated in the 'Justice' album where I felt sort of compelled to try to show ability."

"Listen, when you've got Dave Lombardo [SLAYER] and Charlie Benante [ANTHRAX] breathing down your back, it was, like, 'Okay, I've gotta…' I tried to step it up a little bit and tried to do my own thing and do all this crazy shit," he said. "I was trying really hard to push the drums kind of into the foreground. And then, after like a year or two of that, I was, like, 'Okay. Seriously? Just do your thing. Chill out. Support the riffs. Do what's best for the song.' So since around I guess the late '80s — so I guess it's been, like, 25 years now — the only thing that's really interested me is just doing the best thing for the song. And sitting and doing the Phil Rudd four-on-the-floor [a technique where drummers strike the bass drum on every beat in the measure], when it calls for that, that's really what I love to do. And just to be able to make James's riffs swing and to make it kind of bounce and to do all that type of stuff. I just turned a corner where I just stopped being interested in trying to do thirty-two paradiddles standing upside down backwards fucking Lombardo style. It's, like, let Lombardo be Lombardo and I'll kind of just do my own thing. But everybody goes through periods of that kind of thing, and I got mine out of my system pretty early. And, like I said, for the last twenty-five, thirty years or whatever, it's just been more about making it swing, and that's what I'm happy to do."

Ulrich also recalled the time in 2004 when he suffered a "medical emergency" just prior to METALLICA's performance at the U.K.'s Download 2004 festival, forcing the metal vets to forge ahead without him, enlisting Lombardo, SLIPKNOT's Joey Jordison and Ulrich's own drum tech to fill in for a full set.

"I have to say that lying in a hospital room in Hamburg, Germany while Dave Lombardo was up on stage [with METALLICA], that was not one of life's most fun moments," he recalled. "It's, like, 'Ugh, okay.' I was on the phone with James. It's, like, 'James, if I leave now, I'll find a plane. I'll be there in a couple of hours.' James was, like, 'Get some chill time. Stay in bed. Do your own thing. You need to recover and recuperate and get whatever it is that's going on out of your body, and I'll see you in two days.' [And I was like], 'James, man. I'm coming.' [Laughs]"

Ulrich told U.K.'s Rhythm magazine back in 2008 that he was no longer bothered by people's criticism of his drumming abilities. "When I hear some of the young dudes, they blow my mind with what they can do with their feet and stuff — but it's not something that makes me go, 'I need to feel better about myself so I'm gonna learn how to do what they do with my feet,'" he said. "I'm not a particularly accomplished drummer but I am very, very, very good at understanding the role of the drums next to James Hetfield's rhythm guitar. I guarantee you I'm the best guy in the world for that, and that's enough for me!"